A tired Irene Le Fleming (19), of Waimate, leans on her bike in Dunedin's Octagon yesterday, after spending the last two weeks cycling to raise money for the Cancer Society. Photo by Linda Robertson.
A teenager who is fundraising for the Cancer Society by cycling the length of the country says grinding her way up the Kilmog on her way in to Dunedin yesterday was among the toughest moments of her trip so far.

A tired Irene Le Fleming, of Waimate, who started cycling from Cape Reinga on March 8, arrived in Dunedin just before 6pm yesterday, more than two weeks into a trip inspired by her aunt and grandfather, who both died of lung cancer.

She and her aunt, who was also her godmother, had been very close before she died last year. Cycling the country was a great way of helping others who suffered the disease, Ms Le Fleming, who boarded at St Hilda's Collegiate School in Dunedin, said.

Grinding her way over the Kilmog yesterday was among the toughest moments of the trip, along with the hills near Cape Reinga at the start, she said.

A touching moment was having a man who had recently been diagnosed with lung cancer giving her money while she was collecting in Christchurch. People could give at www.fundraiseonline.co.nz/irenelefleming 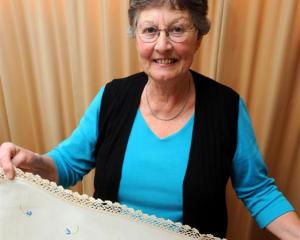