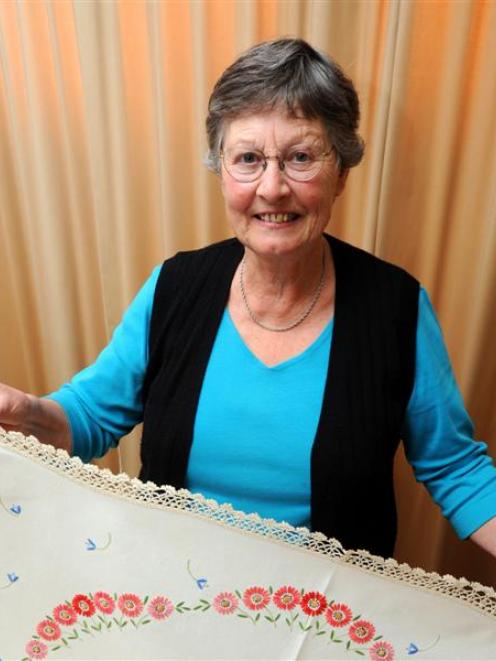 Barbara Rowe with vintage linen she is selling to raise funds for a foodbank. Photo by Gregor Richardson.
A Dunedin woman has found a novel way to combine two of her loves, linen and community fundraising.

She then washes, bleaches, removes stains, dries, repairs, starches, and irons the delicate fabrics and sells the pieces on an internet auction site to raise money for community projects.

Her latest venture raised more than $1500 for the foodbank, a figure which was still climbing, she said.

"We live in a country where the haves, if their hearts are touched, will give to the have-nots and that's good.

"I can't be bothered with these people who have the gimme-gimme attitude."

Mrs Rowe has been collecting and restoring linen for more than 10 years.

The idea came to her when she was a convener for the Mornington Presbyterian Church, looking for an innovative fundraising idea to help the church relocate from Glenpark Ave to Maryhill Tce.

But after a decade in the game, she thinks there is an untapped market online and her restored linen sells from anywhere between $10 and $100 a piece.

The retired nurse had high standards of cleanliness and liked getting the linen to a pristine state.

"When you see the racks of clean linen they are just glorious.

There was no single remedy for combating troublesome stains and it came down to patience, persistence and trial and error, she said.

"What treats one stain is sometimes not what treats another, but if you keep at it, you eventually get there."

While Mrs Rowe has never been an embroiderer herself, she admires the work women did years ago and considers herself a "gopher" for them.

"The quality of those antique linens that are anything from 100 to 150 years old are still amazing."

She works alongside a team of dedicated volunteers, helped by expertise offered by Otago Embroiderers Guild members.

People were more than willing to give their unwanted linen and Mrs Rowe has been overwhelmed with their generosity.

"I think they like the fact that it's going to a good cause and often, they don't know what to do with it. They're just happy that it's getting used."