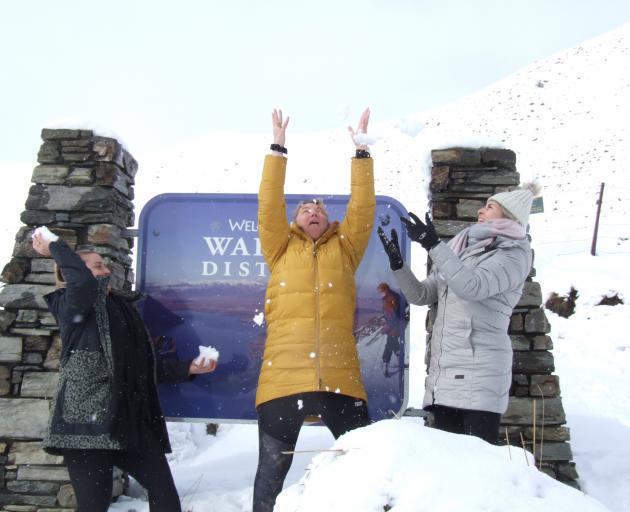 Having fun in the snow at the summit of the Lindis Pass yesterday afternoon were Allanah Kelly-Curtin (left), Jessica van Slooten and Maria Templeman, all from Auckland. The trio were on a two-week ‘‘girls’ trip’’ and were delighted to encounter a dump of snow. PHOTO: SALLY RAE
There has been an unsettled start to spring in ski paradise.

On the skifields yesterday, The Remarkables lift staff were shovelling snow away from chairlifts, and at Treble Cone, ski patrollers were letting off avalanche-control bombs.

Down on the valley floor, sunshine periodically burst through curtains of rain to shine on puddles of daffodils.

Queenstown and Wanaka skifields were rejoicing at between 30cm and 40cm of snow overnight on Monday, but the New Zealand Mountain Safety Council was urging people not to venture into high-risk, avalanche-prone back-country.

Queenstown and Wanaka are among eight regions where ‘‘high’’ avalanche risk warnings have been issued.

Treble Cone skifield’s website reported ‘‘an epic powder day’’ with 40cm of new snow on the upper Home Basin and 25cm in the car park overnight on Monday.

The Remarkables had 30cm of powder and Coronet Peak between 15cm to 20cm of snow.

Mountain Safety Council chief executive Mike Daisley said snow enthusiasts should stay away from the back-country and mountains over the next few days.

Avalanche danger levels were at a winter season high after significant falls of snow. Natural and man-made avalanches were likely, he said.

It was not common that eight out of 12 avalanche forecasting regions were classified as ‘‘high’’ avalanche danger, and the remaining four as ‘‘considerable’’, he said.

‘‘[Many] ski areas are closed or partially closed today to conduct avalanche-control work.

‘‘This control work doesn’t occur in the back-country, so it needs even more time to settle and stabilise,’’ Mr Daisley said.

Meanwhile, the avalanche-prone Milford Road, State Highway 94, between Te Anau and Milford was closed from Hollyford Road Junction to the Chasm yesterday because of rain and snow.

The Crown Range and the Lindis Pass were cleared and gritted yesterday and open for traffic.