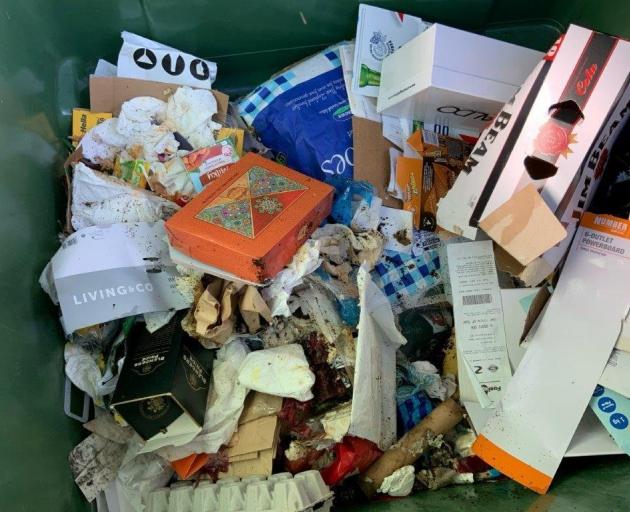 General waste has been dumped among recycling at the Enfield Recycling Centre again. PHOTOS: SUPPLIED BY WAITAKI DISTRICT COUNCIL
Illegal rubbish dumping at a North Otago recycling centre is being turned into an educational opportunity about waste disposal.

In the past three weeks, several bags of general waste have been found dumped inside, or near, recycling bins at the Waitaki District Council’s Enfield Recycling Centre near Oamaru.

When mixed with recyclable materials, general waste can contaminate the recycling and make it unable to be properly processed.

Council solid waste manager Steve Clarke said contractors found contact details among the rubbish, and he spoke with those at fault.

Those responsible were new to the district, did not realise the bins’ purpose; instead of reprimanding them, it was a good way to provide extra information.

"It’s a nice way of educating.

"It’s a really good opportunity to get the message out there ... I think it’s more an accidental thing than a deliberate thing," Mr Clarke said.

Rubbish dumping happened sporadically throughout the three unmanned council recycling centres in Enfield, Papakaio and Herbert, and Mr Clarke was considering options to prevent it from continuing.

It could mean the recycling stations were turned into "manned operations" and he was considering spending more time talking to the residents in those areas regarding rubbish dumping, he said.

About 99% of residents knew what recycling bins were for, but there was a small minority who were causing the problems.

"Unfortunately the impact is quite large. It’s for recycling, and it’s just a case of people taking care of what they do — it’s just a behaviour thing.

"The residents of the district can certainly get a pat on the back for the efforts that they make towards recycling because it is really good."