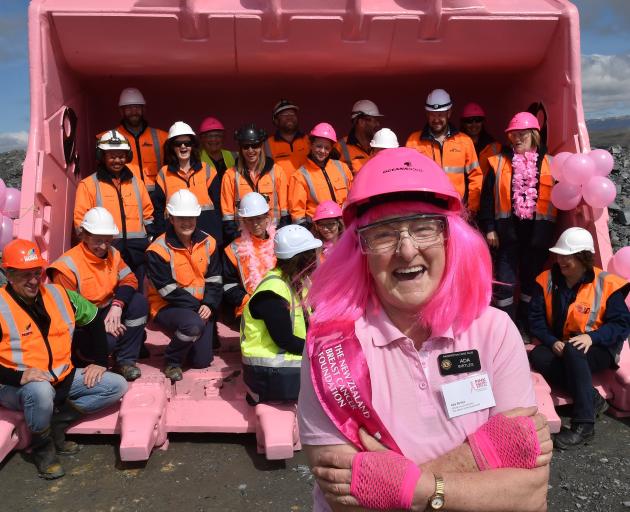 Ada Birtles (73) fronted the Palmerston Lions Club’s 2019 Pink Ribbon Appeal just a year before she was ousted from the group. PHOTO: ODT FILES
Beneath Palmerston’s tranquil exterior, tensions between rival groups of pensioners have been bubbling, ultimately spilling over into a bitter court case. Rob Kidd traces the origins of the discord.

You can see almost everything from atop Puketapu.

The Pigroot cuts through undulating hills to Central Otago, portions of farmland roll, there is the Shag River, the untamed East Otago coastline.

Pure, limpid perspective. And at Puketapu’s foot lies Palmerston, a town of fewer than 1000, sliced up by the confluence of the busy State Highways 1 and 85.

What is invisible from the "sacred hill" are the other divisions in the community. 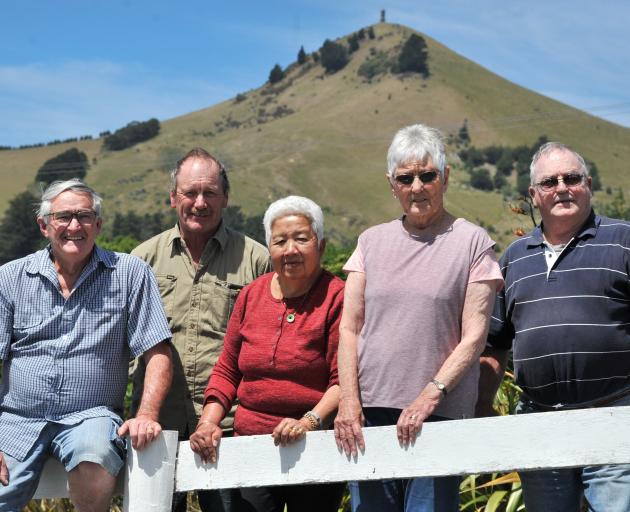 Lions Club members (from left) Sandy Sandford, Ron Sheat, Vonnie Sandford, Eileen Birtwistle and Baz Stevens. PHOTO: CHRISTINE O’CONNOR
The residents of the seemingly sleepy settlement — many of whom are retirees and pensioners — have been at war, fuelled by a rumour mill that has turned relentlessly and the personality politics of the town’s volunteer groups.

"You’re on one side or the other side," Baz Stevens said.

He and his wife are one of half a dozen families who left Palmerston in recent years, motivated in part by the atmosphere within the community.

His wife, Jill, said she had lost weight and her hair had fallen out in clumps because of the stress.

"By the time the house sold, I thought, ‘I need to get out of this place, it’s so toxic’."

It was only when they left that the anonymous text messages began, a case that finally fizzled out in the Dunedin District Court last month.

He served as a lance corporal in the New Zealand Army in Vietnam and moved to Palmerston from Christchurch with wife Vonnie in 2014.

At first, it seemed idyllic.

"Fishing at Moeraki, Shag Point; boat ramps at Waikouaiti and Karitane; farmers up here will let you have a shot — what more could I ask for?" Mr Sandford said.

But the couple quickly discovered it was not the sedate sanctuary they had hoped.

Having spent 25 years in the military, Mr Sandford gravitated towards the RSA, where he met 73-year-old Ada Birtles.

He described her as "knee-high to a grasshopper", but with a fiery temper that far exceeded her stature.

Like all long-standing grudges, the participants disagree on its origins.

There was a scandal about misappropriation of the poppy money one year, and a spat about whether Mrs Sandford’s cooking had caused some upset stomachs, and factions quickly emerged.

Birtles — who volunteered at several community organisations — told the Otago Daily Times she had tripped in the RSA and accidentally dislodged the ceremonial bell.

Since that moment, she believed she had been relentlessly pursued by those bent on sidelining her.

Birtles’ former friend, Eileen Birtwistle, said she cut ties with her when she became consumed by the feud.

"She went on and on about different people," she said.

Ron Sheat, former president of the local Lions, involved Birtles in club activities and said he repeatedly offered his support.

But she was a coiled spring, a firebrand who liked to have her voice heard, he said.

"As long as things are going Ada’s way, it’s fine, but if you don’t agree with something she wants done, that’s when things change," Mr Sheat said.

Birtles’ animosity towards Mr Sandford spilled over during a Lions meeting in February last year, Mr Sheat said in a letter to police.

She had abused him in front of other members, he wrote, and was "unrepentant" when she was asked to apologise.

As the head of the branch, he chose his own board.

Birtles, unsurprisingly, was not among those selected.

Of the 30 members of the club, half were preparing to walk away because of the woman’s histrionics, Mr Sheat said.

The wide-ranging abuse began with allegations the veteran had never actually served in the armed forces and then veered into claims of sexual impropriety.

"Watch this space. Will be 4warding this 2 all ur mates," it said.

The vitriol continued for three months, spanned more than a dozen messages and also featured several crank calls, but Mr Sandford said it was that first message that truly rocked him.

The stress it caused exceeded what he experienced in two tours of Vietnam, he said.

Mr Sandford was a type 2 diabetic as a result of exposure to Agent Orange, and he said his health took a considerable dive during the period.

Birtles also targeted Mrs Sandford, taking particular aim at the tidiness of her property and her culinary skills.

"Tell that lady that u live with to do ur house work," she wrote in one message.

"Take some cooking lessons as u cant cook for s...," another read.

And once Birtles unleashed, others felt the heat of her anonymous wrath.

Mrs Stevens was bemused when she started receiving nasty messages, mostly derogatory references to her appearance.

It was made all the more confusing, she said, by the fact she had had little contact with Birtles and was oblivious to the extent of animosity that existed.

"They were vicious lies with no foundation or truth," she said in her victim impact statement before the Dunedin District Court.

No feud, it seems, was too petty.

A spat at the local euchre club led to Birtles turning her attention to third victim Maureen Gaffey, a 72-year-old who had returned to Otago three years earlier to be closer to family.

A text message sent on July 18 referred to the victim as a "f... b..." and made damning reference to the woman’s family.

She took a snipe at a man in Blenheim, telling him to “watch ur back mate”.

Birtles pleaded guilty to four counts of misusing a telephone before the Dunedin District Court, charges that carry a maximum penalty of three months’ imprisonment.

"This is what you’d expect from a teenager," he said.

Birtles had no criminal record, had brought up four children, mostly as a solo mother, and had years of volunteer work behind her.

While she accepted the criminality of her actions, convicting her over a relatively trifling matter would be a step too far, Mr Turner argued.

"The black mark would be a blight on the latter years of her life.

"It could be something she carried with a very heavy heart," he said.

At the scheduled sentencing hearing in December last year, he urged Community Magistrate Simon Heale to discharge Birtles without conviction.

"What you did was no accident — it was calculated," the magistrate said.

"The bullying was petty, profane, immature and cowardly."

Mr Heale accepted, however, a discharge would be appropriate, but wanted proof the pensioner had put the objectionable behaviour behind her.

When Birtles came before the court this month, police confirmed there had been no further antagonism.

Mr Heale accepted confirmation the defendant had paid $1000 to her victims and sent her on her way, preserving her clean record.

At the December hearing, the magistrate expressed some scepticism about Birtles’ remorse.

At a restorative justice conference with the victims, she had agreed to put a public apology in the newspaper, but later reneged.

And when the ODT spoke to her last week, she immediately said she stood by the sentiments expressed in the vituperative messages.

"What I said was the truth, and the truth hurts," Birtles snapped.

"What I done is nothing compared to what they did to me."

She denied she had driven anyone out of town and argued she was the victim.

While there were some in the community who had shown her sympathy, she said she continued to be shunned by the organisations in Palmerston where she had once volunteered her time and energy.

When asked why people had it in for her, Birtles had one explanation.

Peter Davis, for whom she acted as caregiver, backed her up, describing Birtles as a "tall poppy" whose work ethic put others to shame.

Just before last month’s sentencing, the Sandfords moved to Australia to be with their children.

Since Birtles’ guilty pleas, it had felt as though the air had been cleared in Palmerston, Mrs Sandford said.

"Everyone acknowledged everyone. It made me happy," she said.

Mr Davis, though, said the whispers remained, and despite being 80, he had the urge to violently lash out.