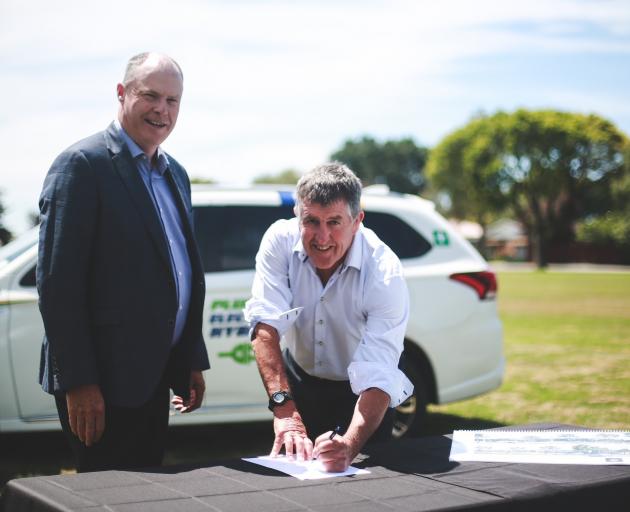 The trust-owned electricity lines company has secured naming rights for the facility, which will be known as the Network Waitaki Event Centre, having signed a 10-year, $2.5million deal with the Waitaki Event Centre Trust and Waitaki District Council.

Network Waitaki chief executive Geoff Douch said sponsorship opportunities on this scale did not come up often, and the timing was perfect for the company.

"This is just another way in which we can help power our community."

The sponsorship consists of an upfront payment once construction starts and an ongoing contribution over 10 years.

Network Waitaki chairman Chris Dennison said the company was proud to support a project that would bring so many benefits to Oamaru and the wider Waitaki district.

"It will also be a real drawcard to bring sporting and cultural events to the Waitaki region."

"It’s another extension of the good relationship that the council has with Network Waitaki and, I think, along with the other sponsorships, this is going to help make sure that we’ve got a really good-quality facility that’s going to serve the community for years to come."

Waitaki Event Centre Trust chairman Kevin Malcolm said the trust had been searching for a naming rights sponsor that was financially strong and community minded — and Network Waitaki ticked both boxes.

More than $19million had now been committed to the $30million project, which includes the council’s $10million contribution, Doug and Donna Hurst’s $5million pledge and LJ Hooker Oamaru and Veterinary Centre Oamaru’s "significant" donations.

He hoped to have between $20million and $22million secured before submitting funding applications for major lottery and community trust grants.

Next month, the trust would meet representatives from 28 sporting and cultural groups to discuss concept plans, so they could be finalised and the tender process for construction could start.

To keep the project on track for a May 2024 opening, for the start of the netball season, ground at Centennial Park would need to be broken by November this year, Mr Malcolm said.