Mud a magnet for youngsters 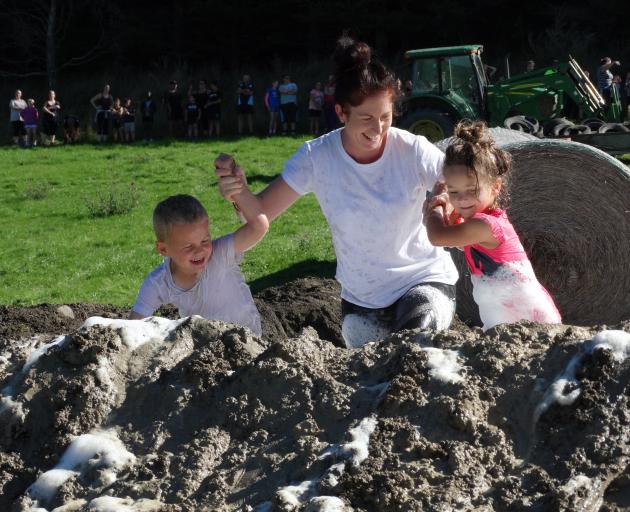 Hudson Mackay (4), Jemma Mathieson and Ede Carter-Newlands (4) negotiate the bottom of the water slide at the Whitestone Wipeout at Oamaru Racecourse on Saturday. Photo: Daniel Birchfield
A bit of mud never hurt anybody.

That was probably the best attitude to have heading into the inaugural Whitestone Wipeout at Oamaru Racecourse on Saturday.

The event, loosely based on the Mud, Sweat and Tears event in Dunedin, was created by St Joseph’s School home and school committee chairwoman Rebecca Heffernan and committee member Rebecca Meek as a way to raise funds for the school.

The 3km or 5km event featured a steep uphill run, forest run, water slide, mud pit, water crossings and crawling tunnels on and around the racecourse.

Mrs Heffernan said about 200 entries were received before the day, and another 100 entered on Saturday.

She said there was a plan to hold the event at least another two times before any decision was made on if it would become a permanent annual event.

"We would like to do it for three years and get a the momentum going. From the feedback I’m getting at the moment, it’s definitely happening again next year ... hopefully it will grow from there."

Oamaru’s Jemma Mathieson said she would definitely be back.

"It’s been awesome and the kids have loved it. It’s a lot of fun and it’s been a great day, too."