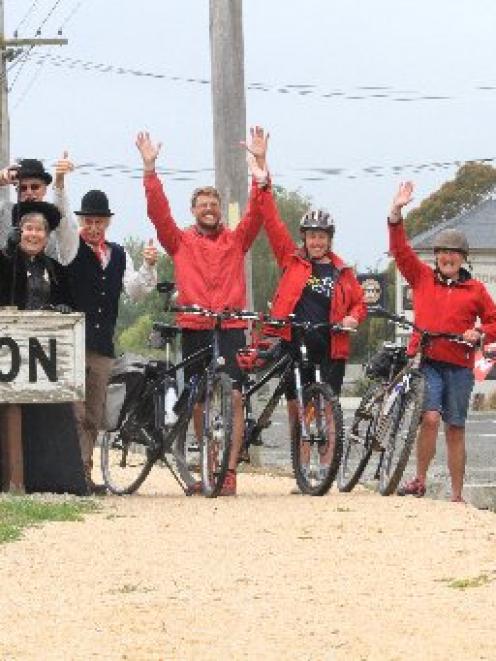 Waitaki Mayor Gary Kircher officially opened the 28km section from Kurow to Duntroon - now totally off-road - in a short ceremony in the Waitaki Valley town. Mr Kircher said the trail would be a boon for the town's economy, but also allowed locals to show ‘‘how proud people are of their community''.

The 301km Alps 2 Ocean Cycle Trail, which stretches from Aoraki/Mt Cook to the Oamaru Harbour, has been signposted and rideable for three seasons including this year, but was expected to be fully open as early as the end of this year Alps 2 Ocean sales and marketing officer Jason Menard.

Mr Menard was among a group who rode the trail yesterday, making it into Duntroon about 3pm for the ceremony.

While the four to six days required for the full ride was a ‘‘big commitment'', riders did not need to tackle the entire trail, he said.

‘‘The important thing is it's not just a continuous 301km journey. People can do a section as a day trip, so it gives all these towns a viable tourism product,'' Mr Menard said. ‘‘If you're staying in Kurow and you're looking for something to do for the day, cycle to Duntroon and get a lift back.''

He hoped the trail would soon be included in a ‘‘Top 10'' list for things to do in New Zealand.‘‘I want to be spoken in the same breath as Milford Sound, Abel Tasman ...

we belong in that [list],'' he said. The Alps 2 Ocean Cycle Trail made it on to travel publisher Frommer's list of the world's best destinations in 2016.