Passion for high country and painting 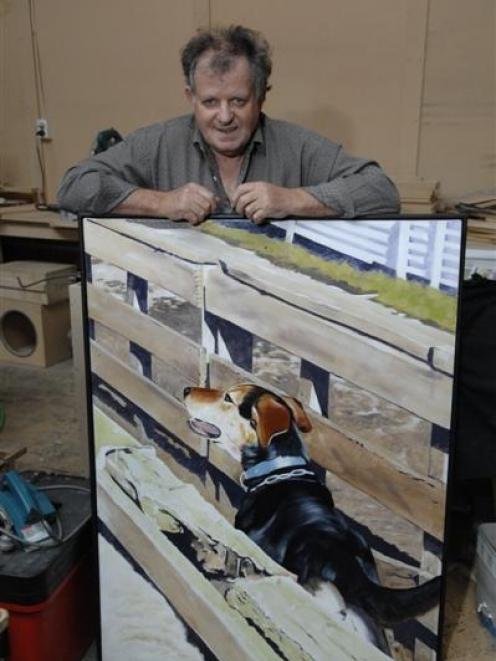 Norman Sinclair with one of his paintings of a huntaway dog, <i>Roy In The Yards</i>. Photo by Linda Robertson.
High country artist Norman Sinclair is looking forward to a trip to the Waitaki Valley next week.

Not only is he having an exhibition at the Kurow Museum - coinciding with the South Island sheep dog trial championships at nearby Hakataramea - but he will also fit in some duck-shooting in the Hakataramea Valley.

The championships start on Monday at the Waitaki Collie Dog Club's trial grounds and Mr Sinclair's exhibition will open at 1pm the same day.

He will be at the museum during the week to talk to visitors and also hoped to get out to the trials, where his daughter, Julia Waldron, is secretary of the Waitaki Collie Dog Club.

The exhibition, which finishes on Saturday, will feature about 20 paintings of his recent work at various stations including Nokomai and Otematata and properties in the Hakataramea Valley and North Canterbury.

He recently returned from the autumn muster at Nokomai Station, near Garston, a trip he described as "absolutely magic" - despite a chilly start of -8degC on the first morning.

"The vista was just incredible, the subject matter was so good," he said.

Mr Sinclair, who has painted full-time since the early 1990s, was as enthusiastic as ever about his work.

"Every station has got a level of excitement which people don't see. I see colour you would struggle to mix on your palette board."

He has given a commissioned painting to be auctioned at the championships, saying it was nice to be able to give something back to the rural community.

He was very grateful and humbled to be asked on to properties and to join those "wonderful" people.

The auction included such diverse items as pups, rams and a guided trophy hunt and he hoped it was well supported.

It will be held during a social gathering in a marquee at the trial grounds on Tuesday night and anyone was welcome.

• More than 200 entries in each of the four events - long head, short head and yard, zigzag hunt and straight hunt.

• Auction in a marquee at the trial grounds on Tuesday night.