In Oamaru it's not unheard of to see little penguins waddling up the ramp at Scotts Brewing Co after dark - as if they were looking to make the last call.

Penguins frequent Harbour St businesses, poke around South Hill residences, promenade in the central business district, and late at night their chorus can be heard for miles.

And yet, news of a sushi stand owner in Wellington calling in the authorities to deal with a couple of the world's smallest penguins made international news this week. 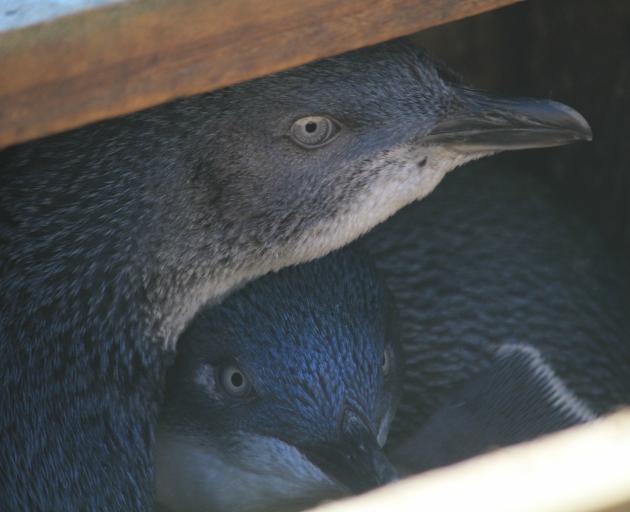 Little penguins peer out of one of the 350 nesting boxes at the Oamaru Blue Penguin Colony yesterday. While many penguins do venture into Oamaru, most nest in one of two harbour reserves for the world’s smallest penguin. Photo: Hamish MacLean

The Oamaru Blue Penguin Colony's Aimee Horrell has regularly been called on to pick up birds from all sorts of odd places in her six years at the colony. And she could not say exactly why somewhat commonplace human-wildlife interactions sparked the public's imagination so much.

''I think they just like the fact that the birds themselves aren't too fazed about where they're going,'' she said. ''They've tucked themselves away, it's nice and dark and safe. And they think they're all good and then we come along and they're in a 'really strange' spot.''

Oamaru Blue Penguin Colony science and environmental manager Dr Philippa Agnew said where the birds were protected, the species was doing well. And despite a bit of pushback from locals early on, the birds could survive in close proximity to humans.

Now a major tourism drawcard for the area, the Oamaru Blue Penguin Colony is situated on the site of a former quarry that was more-or-less abandoned by the early 1970s.

Soon after, penguins began occupying the site and in the mid-1980s ''it became quite controversial'', Dr Agnew said.

In 1985, the Oamaru Mail reported the mayor of the time calling the site's supposed potential as a tourism attraction ''ludicrous''.

''They're nesting in a disused quarry - they're trespassing in our quarry,'' he said. ''It's a quarry - the cement industry is vital to the economical survival of this area.''

With about 650 nesting boxes in Oamaru Harbour, penguin numbers in the area were increasing.

At the Oamaru Blue Penguin Colony there was a long-term average 8% to 9% increase in breeding pairs - ''a really good growth rate''.

And though most chicks that fledged returned to the colony some of the birds would naturally ''spill over'' into town.

''And I think it can be managed really well,'' Dr Agnew said. ''Because there's no reason why penguins can't live in an urban environment. They just need to be given space, and respect, to be allowed to breed - and live without disturbance. Because we see them all the time, people start to forget, I guess, that they are wild animals. And that they might be really scared of people and the things that we do.

''It's all about managing, not just the penguins, but the people's attitudes and the way they act around penguins.''

After breeding season started at the beginning of May there were 18 breeding pairs at Oamaru - 18 chicks and 16 eggs. Last season the tourism colony equalled its historic high of 189 breeding pairs at the old quarry site and this year it could break it.