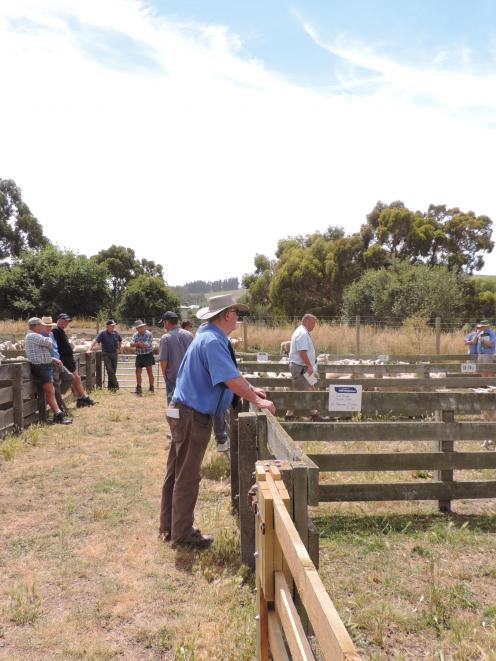 Instead of being crowded as in other years, the Waiareka Saleyards were all but deserted for the 2015 Oamaru Ewe Fair on Monday. Photo by Sally Brooker.
There were obvious signs this year's Oamaru Ewe Fair was small.

Plenty of parking slots were available right outside the Waiareka Saleyards just minutes before starting time on Monday.

And the race where bidders and spectators watch the auction action, usually with jostling room only, had enough space to swing a tiger, never mind a domestic moggy.

A glance into the pens confirmed it - there was indeed a tiny yarding. Three decades ago, the yards would have been overflowing. This year, there were plenty of empty pens.

PGG Wrightson Oamaru livestock manager Mark Yeates, who was about to start the sale when two ewes leapt out of the first pen, said there was ''a quality yarding of active sheep''.

''They're in good fettle, aren't they,'' he said as his colleagues rounded up the escapees.

''We're under some challenging conditions this year. It's a good opportunity to buy good, sound ewes. They will be a good price relative to their productive potential,'' Mr Yeates said.

The first pen was capital stock from the Rocklands Partnership at Teschemakers, where the owners were increasing their arable operation and ''divesting ewes'', Mr Yeates said.

Next up were Perendale two-tooths from R.B. McLeod, of Tussocky Rd, which went for $90 a head.

A line of Coopworth-cross 2-shear ewes made $98, then the sale ''got a wee bit sticky for a while'', Mr Yeates said.

Several pens of middle-aged ewes were passed in, before the older, annual draft ewes achieved about $70.

''It was reflective of what's happening with the climate, with feed conditions, and with the large majority of irrigated ground in North Otago engaged with dairy and dairy support.

''There are sheep farmers out there who do need to and will want to buy stock. But there are still a lot of cull ewes that have not been processed yet.''

Rural Livestock Ltd representative Don Roney said the fair had ''probably the smallest yarding and smallest bunch of buyers for a long time''.

''There were some good enough ewes there. But only a few farmers are wanting a bit of a top-up.

''Prices were slightly below expectations for a dry year.''

That was due to the combination of a lot of factors, such as weather and timing, he said.