Wizard spells out why world failing 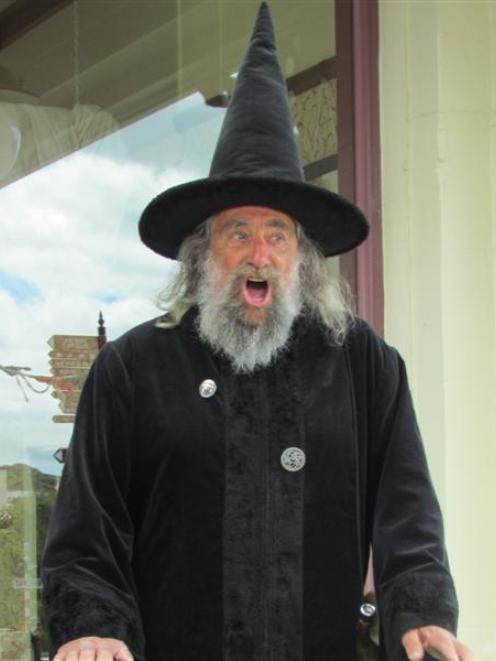 The Wizard lectures passers-by on the evils of feminism outside Annie's Victorian Tea Rooms in Oamaru yesterday as part of Oamaru's Victorian Heritage Celebrations. Photo by Ben Guild.
Often, in times of great turmoil and unrest, a prophet will rise above the masses and hold court on society's ills.

That figure yesterday, bellowing out his views from a soapbox on the corner of Itchen St and Thames St in Oamaru, was a wizard.

The Wizard of New Zealand (formerly Ian Brackenbury Channell), formerly of Christchurch and now of Oamaru, dominated proceedings, placing the blame for all worldly problems firmly at the feet of women and feminists.

Always a great orator, the Wizard took advantage of The Great Corner Soapbox Debate, one of the activities of the Oamaru Victorian Heritage Celebrations, to espouse his theories on women.

"What I have to say will not be heard in school classrooms, universities or recommended newspapers or magazines," he cried.

"My thesis is that this world is run by women. That's why the world is doomed; we have to do something very fast or we will be ruined."

He traced the origin of man's problems back to original sin; to the fall of man at the devious, sensual, deceitful, charming hands of Eve.

Long-winded, but in short order, he detailed how women brought about economic decline, war and environmental destruction.

Wars throughout history had started for two reasons, he said: the need to attain a sufficient quantity of arable land to satisfy the insatiable demands of motherhood and the desire for raw materials with which to create the "junk" which filled the stores for women to buy.

Feminism was a ploy by the aristocracy, who understood working women made rich men richer, he thundered.

"We should let women run the world," he proclaimed, adding that his woman had worked and paid his bills since the 1970s.

Female hecklers besieged the wizard from all sides, but he used his craft to ward off the strident accusations of misogyny.