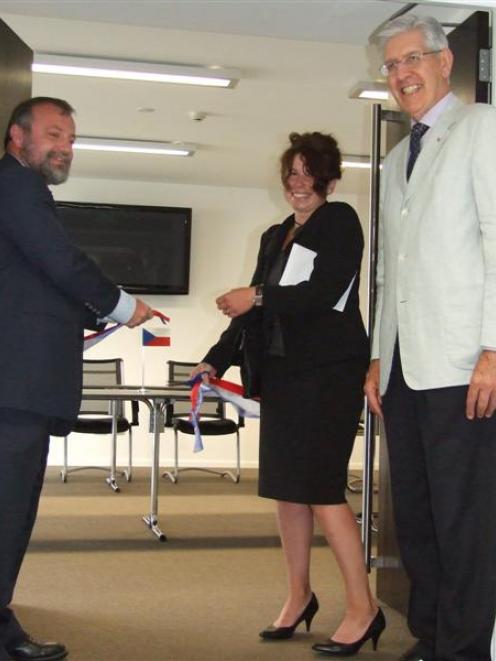 Not enough official support for Czech visitors to New Zealand prompted the opening of a second honorary consulate, in Queenstown, on Thursday.

As New Zealand does not have an embassy for the Czech Republic, its ambassador in Australia, Dr Hynek Kmonicek, assisted in formally opening the new consulate, and appointing Glenorchy resident Vladka Kennett to the position of honorary consul.

Originally from the Czech Republic, Mrs Kennett said she had a hankering to provide official help to Czech people in New Zealand, as ''a lot of people got in touch'' with her anyway, asking for aid.

Dr Kmonicek is based in Australia and assisted Mrs Kennett in cutting the ribbon - in the colours of the Czech flag - draped across the doorway to her office in Church St, Queenstown.

Queenstown Lakes Mayor Vanessa van Uden, a police representative and Glenorchy residents were on hand to witness the ribbon-cutting ceremony.

Dr Kmonicek thanked New Zealand's other honorary consul for the Czech Republic Gregory Shanahan, based in Auckland, for handing over ''half his kingdom''. Mrs Kennett will provide help for Czech people in the South Island, while Mr Shanahan will cover the North.

Honorary consuls are able to officially witness documents such as passports and Mrs Kennett's office in McCulloch and Partners will be open every Wednesday from 1pm until 4pm.

Mrs Kennett also hopes to refresh New Zealand's business connections with the Czech Republic, a trade which is at present based on Skoda cars.