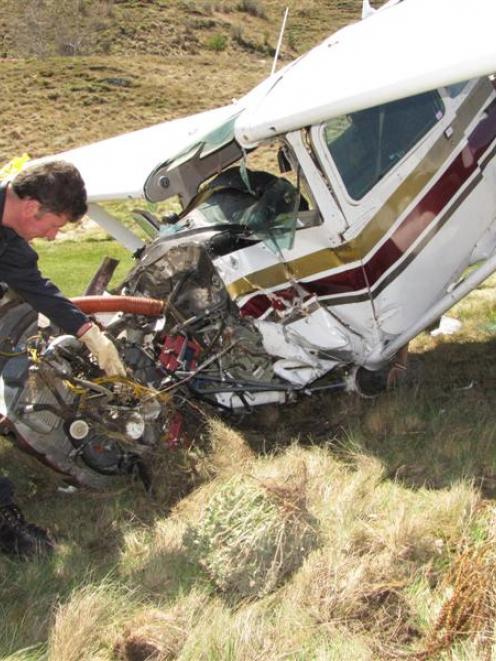 Civil Aviation Authority safety investigator Colin Grounsell examines the wreckage of the Cessna that crashed on the Arrowtown golf course just under a year ago, killing pilot Ian Sloan. Photo by James Beech.
The owner/pilot of a Cessna 172 Skyhawk died last year from a blunt-force head injury and severe facial fractures after his plane crashed at the Arrowtown golf course, the Civil Aviation Authority (CAA) has found.

Ian Douglas Sloan (59), of Tauranga, was pronounced dead at the scene on October 17. His son-in-law, Wayne Candy, and aviation enthusiast Joan Urquhart sustained serious injuries in the crash, which destroyed the plane.

However, because of "rotational impact forces", the pilot was thrown to the right in his seat and the diagonal shoulder restraint "became ineffective".

"As a result, the pilot received head injuries from striking the instrument panel."

Mr Sloan, who had 315 hours' flying experience, was piloting the aircraft as it approached the private airstrip known as Monks Strip, about 3.15pm on a return trip from Invercargill.

"As the aircraft approached Monks Strip, the passenger seated in the front right-hand seat [Mr Candy] began to video-record the flight using his iPhone.

"He continued to record the remainder of the flight, including the accident sequence."

Stock on the landing area were visible on the recording, and Mr Sloan carried out a "low pass" to clear them.

Moderate turbulence was encountered near the eastern end of the airstrip, along with strong crosswinds on the left.

Mr Sloan then increased engine power and altitude, flew the plane towards Arrowtown and turned around to begin an approach to land at the airstrip from the opposite direction.

The video recording showed Mr Sloan selected 20deg of wing flap on his final approach, which was high, and the ground speed was also higher than "would have normally been expected".

The report said it would have been "prudent" for Mr Sloan to have conducted a "go-around rather than continue with the landing".

The aircraft touched down about 250m into the 500m airstrip, and "bounced lightly twice" before settling on the ground.

After the craft became airborne he initiated a climb and left turn to avoid power lines and trees, also contending with a strong crosswind and moderate turbulence.

"The pilot continued to raise the nose of the aircraft. The stall warning was heard to sound in the video recording ... The aircraft then rolled rapidly to the left and pitched down as the aircraft entered a fully developed wing drop stall.

"As the aircraft rolled and pitched towards the ground, it was observed in the video recording that the pilot was holding the elevator control fully aft. The aircraft rapidly lost altitude and struck the ground."

The CAA concluded Mr Sloan had raised the nose of the aircraft to "an excessively high angle", but might have had difficulty establishing a "true horizon" to use as a visual reference on his climb out, due to the rising terrain of the Crown Range, the report said.

"It is possible that the pilot may have been fooled by a false horizon and therefore continued to raise the aircraft's nose to establish what he perceived to be the correct climb altitude."

After the aircraft stalled, Mr Sloan's actions were "incorrect" for a recovery; "however, there was probably insufficient altitude available to ensure a safe recovery".

The CAA found Mr Sloan was appropriately licensed to carry out the flight and was familiar with Monks Airstrip, having used it for takeoffs and landings about 18 times since the previous February.

Moderate turbulence and crosswind conditions encountered at the time of the incident were "significant factors".

After the incident, a CAA safety recommendation was raised to develop information for pilots regarding unsupervised operations at airstrips.

"The prudence of obtaining additional training for airstrip operations will also be highlighted."

The information would be published in the CAA Vector magazine later this year.

The CAA has closed the file relating to Queenstown helicopter pilot Pete Sax.

Mr Sax was investigated after allegations he broke aviation rules by flying lower than 500 feet in conservation areas, including the Fiordland and Mt Aspiring National Parks.

The CAA's investigating officer was satisfied there was no breach of the authority's rules.