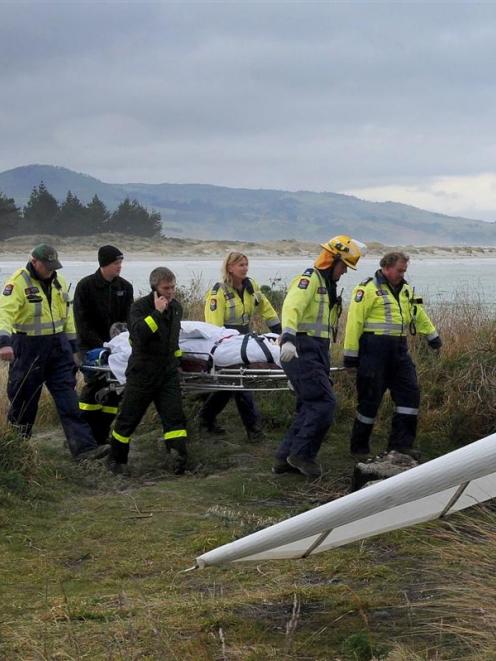 Emergency services were called to the Waitati reserve shortly after 3pm, after reports the pilot had crashed.

Eyewitness John Smith, who was supporting the group of hang-gliders, said the pilot appeared to fly "deeper over the dunes than he should have" on his landing approach.

The pilot, Guy Williams, of Dunedin, was believed to have hit an air pocket before plunging headfirst from a height of about 4m, he said.

The pilot was knocked unconscious in the heavy landing, he said.

Mr Smith rolled him on to his side and "he started breathing after about five seconds with all this blood and mucus in his mouth".

"It was quite shocking ... I knew he had landed quite heavily, but I didn't expect him to be that bad."

Mr Smith contacted emergency services, and the Otago Regional Rescue Helicopter, which was at Dunedin Hospital at the time of the incident, was dispatched to the scene.

Mr Williams, who Mr Smith said was an experienced hang-glider pilot with more than two decades' flying experience, was assisted by a doctor who lived nearby, and the Waitati Volunteer Fire Brigade.

He remained in Dunedin Hospital last night in a stable condition in the neurosurgery ward.

"He is a lovely man, and we are glad to hear it may not be as serious as we first feared," Mr Smith said.

The crash would be investigated by a local safety officer, who would report to the New Zealand Hang Gliding and Paragliding Association, which in turn would pass the report on to the Civil Aviation Authority.