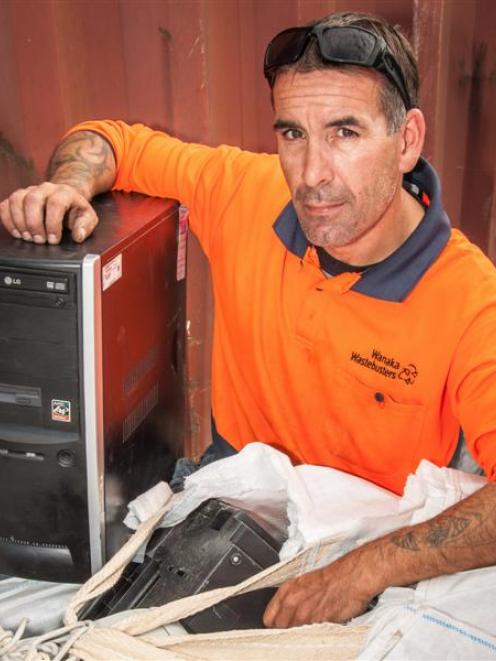 Wanaka Wastebusters guardian Matt Plant with some of the electronic waste saved from the landfill for eCycling. Photo supplied.
Queenstown has saved more than five tonnes of toxic electronic waste from poisoning land and water from June 31, but it is still lagging behind Wanaka, which eCycled almost 20 tonnes in the same period.

On the annual e-waste amnesty ''E-Day'' in 2009, Queenstown eCycled seven tonnes of e-waste compared with 12 tonnes in Wanaka.

Queenstown improved on E-Day 2010 with eight tonnes, more than the 5.53 tonnes in Wanaka.

However, Queenstown slipped again when RCN eCycling began year round in 2011-12 and 3.26 tonnes were deposited, significantly less than the 17.25 tonnes eCycled in Wanaka by the same initiative in the same period.

Wastebusters collected 57.23 tonnes of televisions from both resorts as part of the national TV Take-back programme in April to August last year.

Wastebusters spokeswoman Gina Dempster said statistics for Wanaka were higher than for Queenstown because the community-owned enterprise pays for eCycling advertising and marketing in Wanaka, but cannot afford to do so in Queenstown.

''Our last pick-up [in Queenstown] was in January,'' Ms Dempster said.

''We will be coming over soon for the next pick-up. We try to do it every three months or so to keep the cost down and make sure we have a full load to bring back.

''We aim to break even on collecting e-waste from Queenstown, but it's not a money-earner for us.''

Wastebusters did pay for advertising of TV Takeback in Queenstown because staff wanted all Wakatipu residents to have the opportunity to recycle their TVs at the subsidised price, she said.

''That was reflected in the numbers. We collected 23 tonnes of TVs from Queenstown during the programme.

''TVs cost $5 to recycle for households during that time, compared to $25 normally.''

Ms Dempster said TVs and CRT (cathode-ray tube) monitors were the most difficult and expensive to deal with because they contained few materials of value to offset the cost of recycling them.

Wanaka Wastebusters and the Community Recycling Network advocate for having the cost of recycling an electronic product included in its purchase price.