Sophie and Pete Oswald’s tiny house at a previous site near Queenstown. PHOTOS: SUPPLIED
After visiting one of the district’s most impressive tiny homes, Queenstown Lakes Mayor Jim Boult has promised its owners he will take a look at what they think are unworkable rules for living in them.

Pete and Sophie Oswald, who live in their home on wheels on a rural site near Queenstown with 10-month-old daughter Tula, believe tiny homes are a viable alternative path to getting on the district’s steep property ladder. 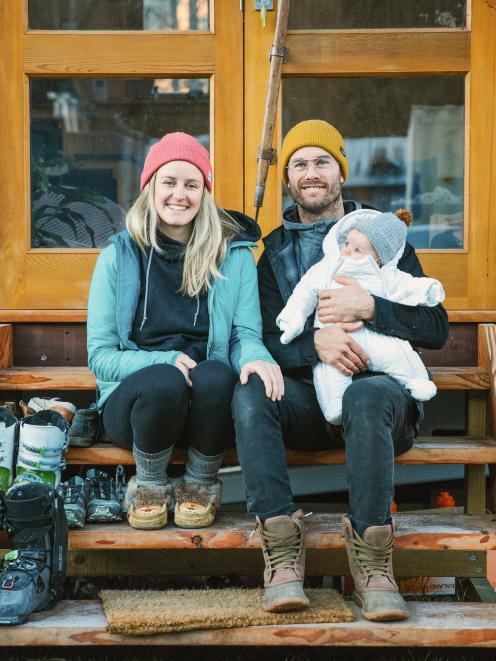 Mr Oswald says existing laws and council policies have created a "grey, unclear, problematic area that nobody can work with — the landowners, tiny house people and councils".

He wanted a bylaw change that gave tiny home owners security of tenure, so long as they were meeting building standards and properly disposing of their wastewater and grey water.

Their home was proof you could build a "healthy, happy home", for about $120,000, which was also environmentally-friendly with very low water and power use.

"You don’t need to use the incredibly wasteful methods of building that happen here, and you don’t need anywhere near as many resources to do it."

He came at the invitation of the Oswalds, who wanted to explain the obstacles tiny home owners faced to achieve security of tenure, even when their landlords were keen to have them.

Mr Oswald said they would have to leave their current site — the third they had lived on in the past 18 months — by the end of the month, because of a complaint by a neighbour more than half a kilometre away.

Landowners had offered them several sites in the Wakatipu they could relocate their tiny home to, but on the proviso it would be within the council’s rules.

Mr Boult told the Otago Daily Times he was impressed by the Oswalds’ tiny home, and they had raised a "valid issue" he wanted to become better informed about before commenting further.

He would discuss the matter with chief executive Mike Theelen this week before deciding on the next step.

Council spokesman Jack Barlow told the ODT it had no specific bylaw or policy relating to tiny homes.

Instead, criteria under the Building Act and in the district plan were assessed against each structure.

The bespoke nature of tiny homes meant each situation was different in terms of their assessment, such as their size and the zoning of their location, Mr Barlow said.