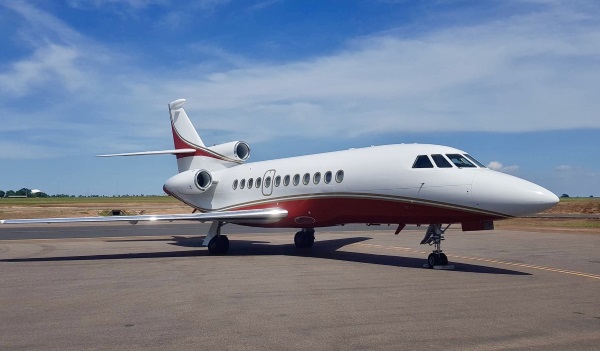 Queenstown-bound: This Dassault Falcon 900 will be regularly flying in high-net-worth visitors. Photo: Supplied
A Queenstown developer is launching a private jet aircraft service from Australia’s east coast to the resort once the travel ban’s lifted.

But he still believes there’ll be enough demand for at least weekly Queenstown flights once the trans-Tasman travel bubble’s in place in the next few months.

From flying regularly across the ditch, Carlin’s met a lot of Queenslanders who own $3 million to $5m holiday homes in Queenstown.

“Those people can afford a more sanitary private jet service if it’s shared with a group of 12 other passengers.”

Due to his association with the aircraft and a pilot, Carlin says the fare will be closer to cost-price than most others air services.

The cherry on the top, he says, is there’ll be no commission fee. 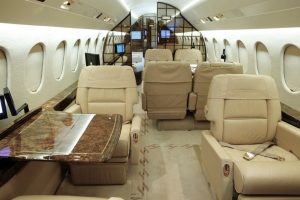 The swish interior of the Dassault Falcon 900. Photo: Supplied

If the plane’s full — with two pilots, a flight attendant and 13 passengers — he estimates the one-way fare from the Gold Coast or Brisbane will be $A2700, though rates will be adjusted to reflect fuel costs and airport fees, including parking charges, at the time.

Flights will also run on demand from Sydney and Melbourne.

"Business class used to be as much as $1600, but airlines will have to raise their fares due to lower occupancy."

The jet’s divided into compartments seating three, four and six passengers, with ample spacing between them.

It will also be ‘fogged’ and cleaned before every flight, and everyone gets temperature-checked before boarding.

"The beauty is you don’t have to go through the airport terminal — the Customs agent comes into the private jet lounge."

Depending how long it’s parked up at Queenstown Airport, Carlin says the plane can also take passengers down from Auckland and Wellington — the Auckland-Queenstown fare would be about $A1500, plus GST.

A former American, Carlin’s been associated with Queenstown since 1991, when he bought land for his Lakeside Estates subdivision.

He also developed The Waterfront apartments in the ‘90s.

In recent times, he’s been development partner with Augusta Capital for a planned 61-room hotel in central Queenstown.

That’s now been deferred, however his nine-suite Queenstown Views Villa, on Hallenstein Street, is still going ahead.

Going by the Australian Financial Review, his latest business could be a real winner.

Last week it reported the founder and managing director of Avmin Air Charter saying demand for private jet hire, due to the Covid-19 era, had never been higher.

"The most queries we’re getting is for flights to Queenstown out of Sydney and Melbourne, and also into Byron Bay [in Australia]."