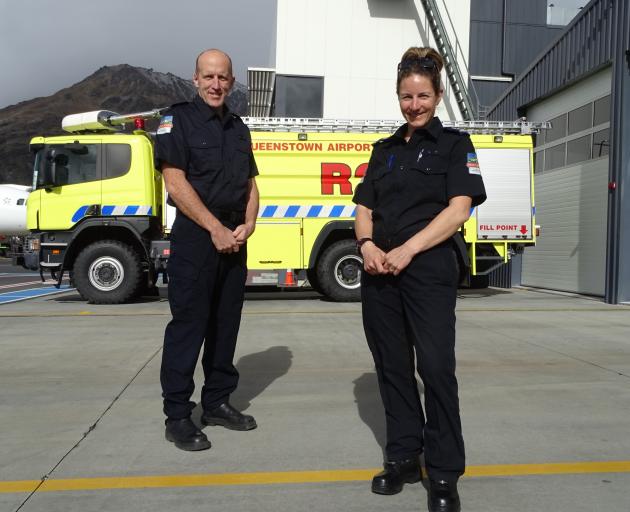 Two of Queenstown Airport’s newest rescue fire graduates Gavin Mason and Aroha Hyland, who have now qualified to become deputy crew chiefs. The other Queenstown graduates were Jordan Lineman and Richard Stokes.PHOTO: TRACEY ROXBURGH
Queenstown Airport has virtually trebled the number of rescue firefighters in the past two years, and last month it almost doubled the number of those qualified to be deputy crew chiefs.

It takes the total number of qualified officers, able to be in control of certain aspects of an incident, to five - one of whom is a deputy crew chief - and three senior officers, who are crew chiefs.

Two of the new graduates will be appointed to deputy crew chief vacancies.

The training began with a two-week course in Christchurch in February focused on team leadership and theory, and ended with a week each at the Auckland training school and the Fire and Emergency New Zealand (Fenz) national training centre in Rotorua last month.

In between, work included assessments of practical scenarios, on-shift training presentations and a three-hour exam.

Mr Mason, previously a St John Ambulance officer, said the "anomaly" of the aviation industry was the rarity of plane incidents.

"The biggest challenge we've got now is actually maintaining the skills."

Unlike full-time or volunteer firefighters, who were able to put training into practice almost immediately, rescue firefighters' ability to use their skills in a real-world context was limited.

"In the absence of experience, we rely on training.

"You don't get to practice the skills - it's all about training, and the best training you can do to be ready if you ever had to use your skills."

Ms Hyland - who spent seven years commuting between Queenstown and Invercargill where she was a full-time firefighter - said the airport rescue fire team had built a relationship with Fenz, which was happy for staff to use its purpose-built facility for training.

"We are currently working through that with them in regards to how we can best do that to create a strong pathway for other staff."

The airport firefighters were focused on the aerodrome to respond to aviation incidents and medical events, and were part of Queenstown Airport's compliance requirements - if scheduled services were due, they must be on site.

In the past two years staffing levels have increased from five to 19, working across three shifts, due to the introduction of evening flights.

Their training was aligned with Auckland International Airport Ltd, due to its 24.99% shareholding in Queenstown Airport, which provided "best practice" for the resort staff.

Airport online communications and marketing co-ordinator Vanessa Hartnell said Queenstown was, technically, still a regional airport; however, the relationship with Auckland had created "an open door".

"We have access to major airport information, processes and opportunities.

"It literally is an open door for our team to go up to Auckland and learn from what's already happening there."

Ms Hartnell said three more rescue firefighters would start work in the resort on December 1, having completed their training, which began in June.