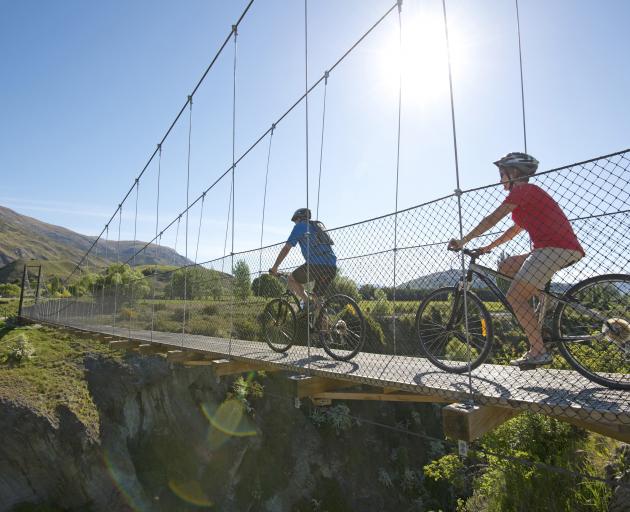 The Queenstown Trail has been mapped by Google over the last few weeks. Photo: ODT files
Nature lovers will soon get to see the Queenstown Trail in its full glory online as the resort's hiking and cycling tracks are brought into the digital age.

Google has been mapping the 120km trail for the past couple of weeks, as part of a project led by the Queenstown Trails Trust and the Queenstown Lakes District Council Parks and Reserves team.

Announcing the project on social media this week, the trust said it was "excited" to have the trail mapped and it was "fantastic" that the footage would be made available online.

Trust executive officer Louise Vicente said once online, the maps would provide a "really good experience" for those who had not seen the trail before.

"It's pretty much the whole trail being mapped. It will encourage more people to get on their bikes."

The trust was "striving towards creating a bigger picture" of the trail and the maps would help show people "what it's really like".

She said the trust was inspired to launch the mapping scheme after seeing Google had mapped trails in Nelson.

More than 190km of trails are being used around the Wakatipu Basin, including the Queenstown Trail, after a trails strategy for the region was drawn up in 2004.

Construction of the new Rotary Club of Queenstown trail, connecting the Old Lower Shotover Bridge and the Tucker Beach Delta, started earlier this year after QLDC approved plans in 2015.

The trust planned to further expand the Queenstown Trail to link the resort's outer suburbs.

The trust was not yet ready to apply for consent to establish the tracks but the first stage of building works was expected to start by the end of next year.

Infrastructure consultancy firm WSP Opus supported the mapping project by taking to the area's trails and tracks with a Google camera.

The "street view" footage of the the trail was expected to be available on Google Maps some time next year.