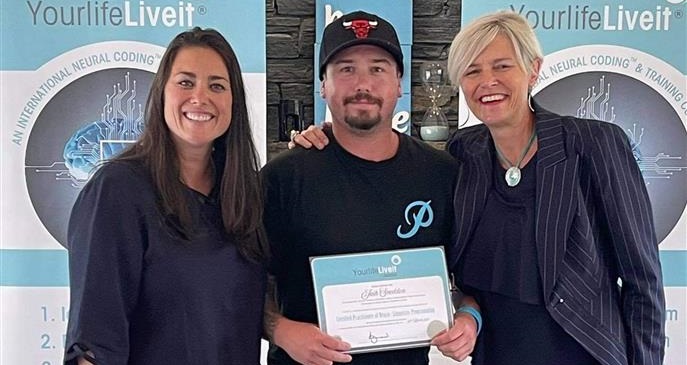 Sarah, left, and Amanda Foo-Ryland with the late Jai Sneddon (centre).
Queenstowner Jai Sneddon endured a tough run in recent years, but he’d started turning his life around and was intent on making positive difference.

Following his sudden death last month, two of his mentors tell Tracey Roxburgh how Jai’s inspired them to continue his legacy of helping others.

Jai Sneddon had a plan.

The 29-year-old Queenstowner was determined to help others in a similar place to the one he’d fought so hard to leave.

His mum, Judi, says he’d been introduced to drugs as a young teen and the fallout caused him and the family untold angst, which continued into his young adult life.

While he went to prison for a couple of short periods for drug-related crimes, in the past year she says he’d started to turn his life around.

“He was determined to get back on track. He was finally growing up.”

He had, by all accounts, forged a new path.

After graduating from a Your Life Live It course on March 28, triple-certified in neuro linguistic programming (NLP), timeline therapy and as a NLP coach, all of which were American board-approved and accredited, he’d decided to become a neural coding coach.

He planned to work with inmates who wanted to change, to help them break the cycle and lead positive lives.

His mum, Judi, asked Your Life Live It coaches Dr Amanda Foo-Ryland and Sarah Foo-Ryland, who took him through the seven-day course just a month earlier, to MC the celebration of his life.

That morning, Amanda says, she went for a run – “it’s my meditation” – and while pounding the pavements came up with an idea.

When she got home, she mentioned her idea to Sarah, only to find she’d had the same one.

Amanda says, put simply, the programme’s a bit like having an app on your phone that doesn’t work.

“So you delete the app … and then you install an app which works much better.

“It’s fast problem, we delete the problem and we install a solution.”

Amanda says Judi completed the course four years ago and knew then Jai would benefit from it.

She sent a copy of Amanda’s book to Jai in prison, where he read it and then loaned it to others and a couple of years later, when she won a place on the course at auction, she gave it to Jai.

During a couple of private sessions beforehand, Amanda “really got to connect with him and realised this young man is really special … he wanted to change his life”.

“He spoke very highly of his mum, how much he adored her, how much she supported him, and now it’s his time to support others.

“Even then he talked about helping others with addiction in the underworld.”

Sarah: “His intention was to go into the prison system, or into the justice system, and start helping people in the system to work on their issues.

“He knew first-hand so many of them wanted to change, but they just didn’t have the support, or the support they felt was the right support for them.

“He knew he could communicate in a way that would give them the change that they were looking for.”

Sarah says he “excelled” during the course.

“We don’t do this never say somebody’s but he was by far … top of the class.”

Jai was also dyslexic – Suzanne Pope-Mayell, who along with her husband, Guy, is a founding trustee of Dyslexia Foundation of New Zealand, says because the course is so visual, it’s “a dyslexic’s dream”, and Jai’s plan to take it into the prison system, where about 80% of the population’s also dyslexic, would have made a massive difference.

Amanda says he was due to come and crew on the next course, starting on June 5, and she and Sarah were going to mentor him as he turned his dream to reality.

While his death was “shocking”, the scholarship was one way of making sure his determination to effect change won’t stop.

It’ll support Queenstowners, but the online component means Jai’s impact will be global.

“It feels good to do this to keep his memory alive,” Amanda says.

Scholarship students will be hand-picked by Amanda and Sarah, with help from Judi and Suzanne, who was crewing on the course Jai completed, to “objectively select the right people”.

The aim’s to support people who don’t have the financial means to do the training, but “demonstrate the right value set and determination to make a change in the world”.

The first scholarship recipient’s been selected – Charles Amoamo will start the course next month.

Fittingly, he’s hoping to pick up where Jai left off and wants to help others overcome addiction.

Amanda: “I think it might be the first one that walks straight into Jai’s shoes.

“Doc Martens at that.”

• For more information on the Jai Sneddon Scholarship, click here