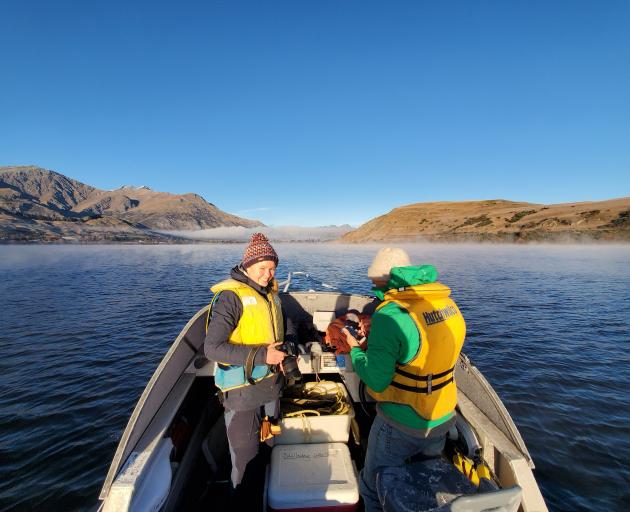 Back in the field and on the water ... University of Otago intern Kari-Anne van der Zon and freshwater scientist Dr Marc Schallenberg in the Stuart F. Mitchell (vessel owned by the Zoology Dept, Otago University) heading out to the middle of Lake Hayes to test the water for lake snow. PHOTO: PHIL NOVIS
Early results from water sampling in four lakes in the Queenstown Lakes district suggest high levels of nutrients may stop the sticky mucus, also known as lake snow, from developing.

Dr Novis said they found the nutrient-rich Lake Hayes was currently affected by two different algal blooms, one on the surface of the water and one lower down.

He said they also found the algae which produces the slime in Lake Hayes but not the sticky slime.

However, in Lakes Wanaka and Wakatipu which had very low levels of nutrients and in Moke Lake which had a medium level of nutrients they always found lake snow.

Dr Novis said this could mean there was ‘‘a threshold of nutrient levels in the lakes where the algae Lindavia intermedia stopped making lake snow, but at the moment we are not quite sure where that is.’’

Dr Novis said the water sampling on the four lakes would continue every six weeks until the three-year Ministry of Business, Innovation and Employment funded Lake Snow Toolbox project ended in March next year.

A scientific buoy specifically designed to monitor and measure lake snow will be deployed to Stevenson’s Arm in Lake Wanaka in the spring.