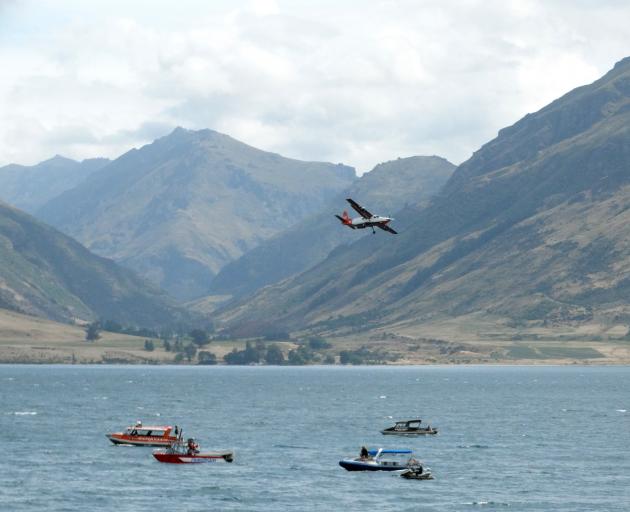 Those answers, according to officials, are still many months away.

The Niis were the second family in a week to raise concerns about the way investigations are handled.

He has not been seen since, and is presumed drowned.

Tyler Nii
His family in the United States said they were frustrated by the length of time it was taking to determine what happened, which had left them grieving and in limbo.

But Minister of Transport Phil Twyford said, while he had sympathy for them, ''investigations need to be done thoroughly to ensure the findings are robust''.

It came as a report obtained by Mountain Scene detailed, for the first time, just what went wrong.

A summary of evidence report compiled during the Civil Aviation Authority's investigation found there were no breaches of any Acts.

The report outlines how Mr Nii and tandem master James Stavro were the last of nine pairs to make their jump.

During the main parachute deployment there were a ''significant number of line twists'' and Mr Stavro made the call to perform a cutaway.

The reserve chute also failed to deploy correctly, which ''resulted in the tandem pair entering Lake Wakatipu at a high rate of descent''.

Upon entering the water, Mr Nii was told by Mr Stavro to pull the life jacket activation tag, but it did not inflate. Mr Stavro then tried to inflate the jacket by blowing into the inflation pipe, but it appeared that did not work either.

The cause of the failure to inflate has not been determined.

''A short time later, despite the best efforts of the TM (tandem master) the victim, Mr Nii, submerged out of view,'' the report stated.

The report noted it was ''very rare'' for a properly-maintained parachute to fail.

It also detailed changes NZONE had made since the incident, including water landing workshops and the inclusion of a jet ski on site.

The changes were proactive steps, the report stated.

Tyler Nii's older brother, Kevin, said the family was frustrated and struggling to get answers.

''We all feel really dead inside; there's nothing we can do.

''There's no help we're receiving from anybody, we're dealing with all these groups and nobody's doing anything to help.''

He said their biggest frustration was how long the investigation was taking.

''There's no information, they don't give us anything. We're still battling with them, they're not answering any questions.

''We email them a couple of times a week, but we just get non-answers.''

They also have not been able to get a death certificate for Mr Nii, meaning even closing his bank accounts was impossible.

''Nobody does anything without a death certificate, so we're pretty screwed.''

He also claimed the family had not had any contact from NZONE.

Queenstown Detective Senior Sergeant Malcolm Inglis said the company did reach out to the family through police, but the family declined to meet them.

The lake is about 250m deep in the Kingston Arm, and very cold, so Mr Nii's body cannot be recovered and is unlikely to surface.

Another tourist who was at NZONE that day said she had concerns about safety practices.

London nurse Natasha Owen was due to skydive shortly after Mr Nii.

She said she was never shown where her life jacket was, or how to use it.

''I didn't feel like we had a safety briefing,'' she said.

She also felt the jumps were ''rushed''.

''It was pretty bad weather, the whole day was delayed by a few hours.''

Mrs Owen said she had never been contacted by anyone investigating the incident.

A spokesman for Mr Twyford said he could not comment on the family's concerns because ''investigatory practices are an operational matter and it would also be inappropriate for the minister to comment while there is an ongoing investigation''.

When asked about funding for the authority and the Transport Accident Investigation Commission, Mr Twyford said in a statement that both organisations were ''sufficiently funded to do their jobs'', noting the authority had undertaken a significant programme of work to improve its regulatory effectiveness.

''My sympathies go out to the Nii family and I understand their frustration,'' Mr Twyford said.

''These types of investigations need to be done thoroughly to ensure the findings are robust and this takes time.''

The funding for both the authority and the commission was reviewed regularly, he said.

This week the family of Queenstown pilot Mitch Gameren, who was killed in a helicopter crash on Fox Glacier in 2015, also called for changes, including a funding boost for the authority.

A spokesman for the authority refused to confirm if the organisation had even investigated the Nii incident.

He said the commission was the lead investigation agency, so ''unfortunately we're not able to comment while that investigation is under way''.

A commission spokesman said the report was at least six months away.

The organisation had about 30 open cases, he said.

Investigations generally took about 12 to 18 months.

So if investigations "generally" take 12-18 months, why is this one that's already at 18 months expected to take at least another 6 months? There's also no explanation for how taking an inordinate amount of time helps make the process "robust". Out of date and vacuous are likely to be more accurate descriptors.

"Robust" is really just shorthand for the usual NZ public service maxim: "we'll do things at a speed that suits us, not the public".