'No threat' from Queenstown fire 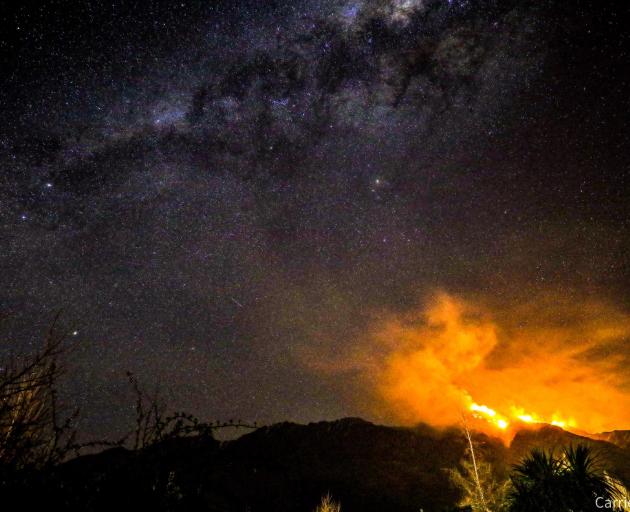 The fire was burning overnight. Photo: Carrie Edgerton
A helicopter was this morning brought in to help manage a controlled burn-off on Ben Lomond, Queenstown, this morning.

The burn-off  which spread over 800 to 1000ha began yesterday evening and has this morning breached containment line, Fire and Emergency New Zealand said in a statement.

"The fire, burning through tussock land, is on the northern face of Ben Lomond.

"Smoke from the fire is visible from Queenstown as it nears the ridge between Bowen Peak and Ben Lomond."

Fenz said crews were not actively fighting the fire because there was no threat to life or property.

Late this afternoon Fenz said the fire was contained, but two helicopters remained on standby.

Fire managers were confident it would burn out once it reached the snow line of Ben Lomond.

Earlier this morning, Fenz shift manager Andrew Norris told the Otago Daily Times the helicopter was there in case the fire spread down the Arthurs Point side.

He said on the other side of the hill, the fire was reaching the snow line and was contained.

Fenz were to continue monitoring the situation.

Last night, Queenstown Lakes District Council issued a statement on social media to reassure residents it was a controlled burn-off on the Ben Lomond Station.

Elsewhere in Otago today, helicopters and ground crews are responding to a burn-off which has got out of control near Macraes, inland from Palmerston.

Yesterday, fire managers were asking people around the region to be responsible and refrain from lighting fires until conditions eased.