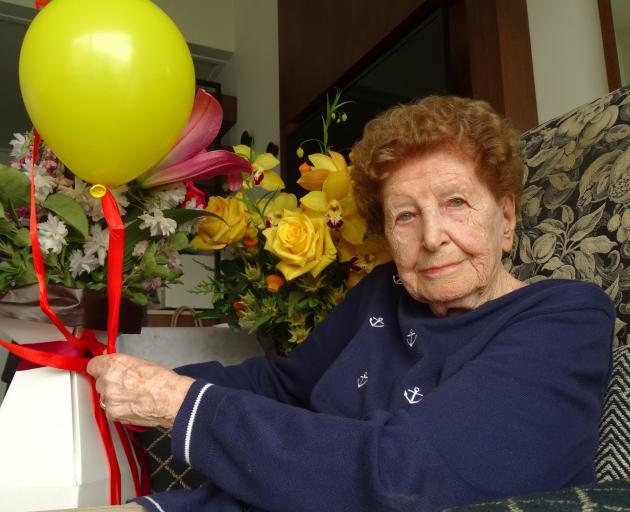 Luce Wilsens enjoys her flowers from Kamana Lakehouse staff. PHOTO: GUY WILLIAMS
Belgian Luce Wilsens had a wee shindig in Queenstown last night to celebrate two milestones: her 90th birthday and the 30th anniversary of her first visit to the resort.

Although the party coincided with her birthday in Switzerland, where she usually spends her northern summers, her big day local time came on Saturday, where staff from the Kamana Lakehouse hotel gave her a cake, bunches of flowers festooned with balloons, and sang Happy Birthday.

Ms Wilsens has stayed at the hotel for the past 30 summers bar one, always staying in the same room.

The hotel even stayed open throughout the Covid-19 lockdown just to look after her after her flight home in April was cancelled.

Although she could have returned to Switzerland in July, she decided to experience her first Queenstown winter.

She told the Otago Daily Times she was particularly happy to be in the resort at a time when the pandemic was causing major upheaval in Europe.

The winter had been "very mild" compared to what she could expect at her chalet, 1500m high in the Alps, where the mercury dropped to minus 20degC and two metres of snow lay on the ground.

"I loved it because you have a lot of native bush that doesn’t lose its leaves — there’s so much green and its doesn’t seem so much like winter."

Although she no longer went for long walks around Queenstown, a driver took her on day trips four or five times a week.

Over the years she had explored every corner of the lower South Island.

"There’s no place I haven’t been."

The widely-travelled Ms Wilsens, who has lived in Belgium, Switzerland and the United States, said she first heard of New Zealand when she was
4.

"I had no idea where it was, but I declared ‘when I grow up, I will go to New Zealand’."

However, it was not until after her partner died more than 30 years ago that her prediction came true.

She is planning to return to Switzerland next March.