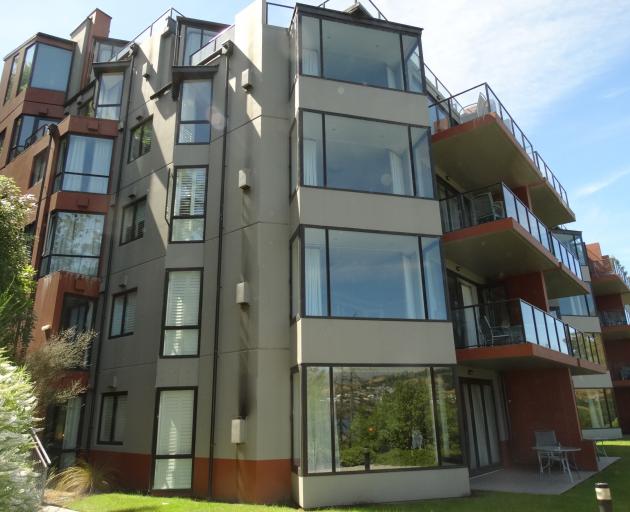 Work to repair the Oaks Shores Apartments is due to start in April. Photo: Guy Williams
Local ratepayers could be picking up a $40 million tab to repair a leaky Queenstown apartment complex.

Work to repair the first of four blocks in the 84-unit Oaks Shores Apartments, off Frankton Rd, is due to start in April.

In 2015 the complex’s body corporate, representing unit owners, lodged a weathertightness claim against the Queenstown Lakes District Council in the High Court, without quantifying it.

Body corporate chairman Graeme Kruger said once the first block was repaired, they would work out what the whole job would cost, then put that amount in their claim against the council.

A quantity surveyor had estimated it would cost $40 million, but Mr Kruger said that could be out 15% to 30% either way.

The body corporate was suing the council because it issued the original building consent in the early 2000s.

Mr Kruger said it was not pursuing developer Ross Wensley because his company went bankrupt.

Mr Kruger said his body corporate had already spent more than $2 million on investigation work such as drilling holes and lifting tiles, and temporarily fixing some apartments.

They had considered rebuilding the whole complex, but that would have cost about $120 million, excluding demolition.

The repair job could take between three and five years."No-one who has ever bought something wants to be in this predicament.

"Not one owner’s happy, but they’re all resigned to the fact that there’s no alternative.

"The owners’ basic sentiment is that we all just want a fair and reasonable outcome, and look forward to having the issues repaired.

"What we want is to leave an asset that we know is sound, and that Queenstown can be proud of."

The amount they sued the council for would include the income that owners missed out on receiving from hotel guests while their apartments were being repaired.

In 2010, the council stared down a $3.8 million leaky-home lawsuit brought by unit owners of another Frankton Rd Wensley complex, The Point.

A builder spent more than 60 weeks fixing that 24-unit complex.

Becks Caswell, of The Oaks Group, said she was "very excited that we’re going to end up with a beautiful product".

"It’s going to be lovely to get all the problems that we have been experiencing fixed, and we see it as a very positive process."

Ms Caswell said they were fortunate individual blocks could be repaired without disruption to the rest of the hotel.

It had also "expressed concern to the plaintiffs that they have not provided sufficient expert evidence, reports or explanation to support their plan to quantify the weathertightness claim in the way planned".

Ms Morris confirmed the council had not had insurance cover for leaky-building claims received June 30, 2009.