Shock followed by 'outpouring of love' 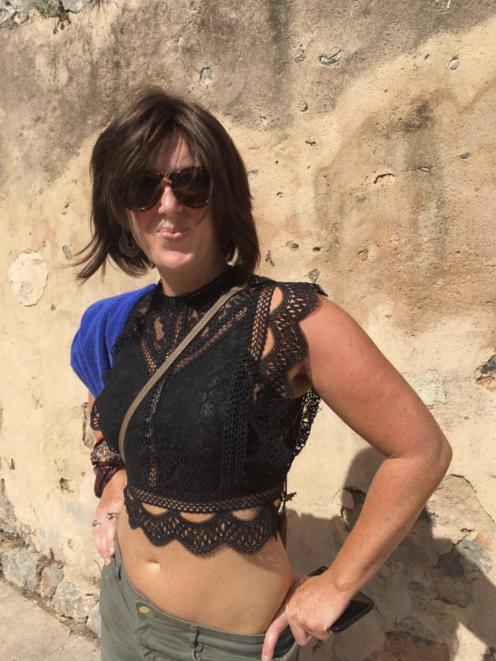 Pip Greig in Spain a few weeks ago. Photo: Supplied
The father of a Queenstown woman who died from dengue fever suspects she did not realise she had the disease.

Philippa Greig (37), known as Pip, had been house-sitting for a friend in a village called Yelapa, in Mexico, when she was bitten by a mosquito.

Last Saturday, about five days after the bite, neighbours noticed she was not herself and was getting weaker.

They took her to the base hospital in the coastal resort of Puerto Vallarta, 40 minutes away by boat.

Father Rob Greig, speaking from Mexico yesterday, said he was told she arrived in a distressed and dehydrated state. Despite receiving 40 minutes of CPR, she could not be brought around.

''There are two types of dengue fever, and she got the worst one.''

He says her death, which was reported in yesterday's Otago Daily Times, came as a real surprise to people in the village she had been staying in.

''They're now calling for officials to spray the whole village.''

He and and his wife, Roz, had been holidaying in Sweden when they learned Pip, a former champion skier, was sick and had been taken to hospital.

Mr Greig said when they got on the phone to a doctor, ''he talked us through it and then he apologised''.

''We said, 'what are you apologising for?'

'''I'm apologising because she didn't make it.'

''That's when the news struck and we suddenly realised she wasn't with us any more.''

The couple had planned to meet Pip in another part of Mexico in about 10 days' time.

''Since this has happened, we've had such an outpouring of love and respect from so many friends.

''Literally hundreds of people have come through to us... she means so much to so many people.''

The couple, who were also being joined in Mexico by their son Andrew, said they had had ''extremely good co-operation'' from hospital staff, funeral directors and New Zealand embassy staff.

Mr Greig was hoping they would be able to fly home in three to five days' time, once arrangements were in place - ''and then we'll have a farewell to her in Queenstown''.

''It's very, very tough, and it's not the way you want to bring your child back home, that's for sure.''