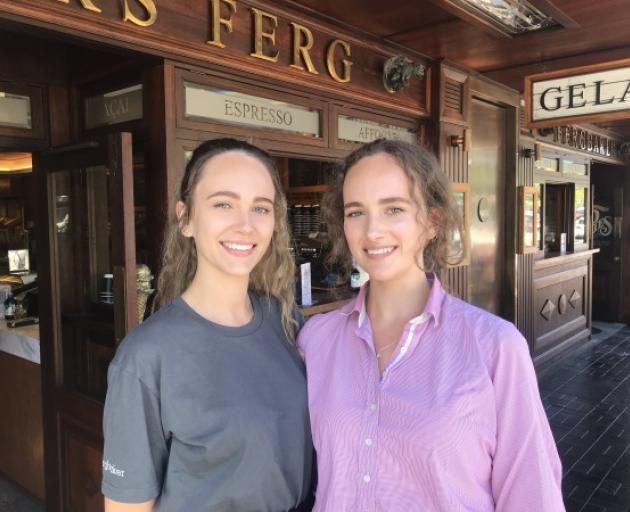 Sisters Danielle, left, and Sammy Billington who've moved from the Waikato for a 'Kiwi OE' in Queenstown, working for the Fergburger group.
Kiwi OE’s first two travellers have arrived in Queenstown.

The new company, set up by Remarkable Labour bosses Blair McNaughton and Ed Stott, launched late last year, intending to help plug labour gaps in the resort’s workforce, and offer an OE experience to Kiwis who can’t go offshore due to Covid-19.

The pair help relocate Kiwis from across New Zealand into Queenstown, Wanaka and Central Otago, matching keen travellers with guaranteed jobs and accommodation.

Earlier this month sisters Danielle, 24, and Sammy Billington, 21, moved from a farm in the Waikato to take up jobs at Fergburger group.

The sisters had plans to travel overseas after studying, but had to put that on ice, instead taking up the Kiwi OE opportunity, arriving here about a fortnight ago.

‘‘The mountains, the lakes, the overall vibe of this place is so refreshingly different from where we were from that it does feel like an overseas adventure,’’ Sammy says.

Fergburger boss Steve Bradley says he’s ‘‘thrilled’’ about what Kiwi OE’s providing for his businesses and the town.

‘‘It’s going to be essential to our rebuild.’’

The initiative is being supported by the Business Response Group, comprising Queenstown’s council, Queenstown and Wanaka’s chambers of commerce, Destination Queenstown and Lake Wanaka Tourism.

Stott says interest from people wanting to do their OE in the Whakatipu straight after Christmas was high and has remained steady.

But a lack of certainty around the trans-Tasman bubble’s hampering those who want to relocate for jobs in tourism and hospo, industries which don’t need extra staff yet.

However, Stott says there’s been high demand for staff in trades and construction and they’re actively working with candidates and clients in those sectors.

‘‘We have already had a number of enquiries from Australians, too, and we’d expect that to really ramp up once the light appears at the end of the trans-Tasman tunnel.’’