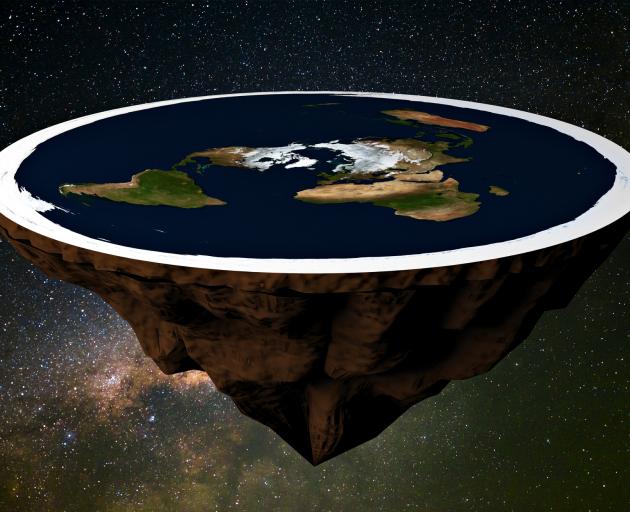 Jamie Mathew Sutherland (36), car groomer, of Frankton, denied threatening to kill Louie Lanz in Queenstown on February 14 - an incident which resulted from a dinner the pair had a couple of months earlier, during which the bet was made.

Giving evidence in the Queenstown District Court before Judge Bernadette Farnan this morning, Mr Lanz, a tennis instructor, said the pair had known each other since primary school and over dinner in Queenstown he spoke about ''the flat Earth, because I believe it's flat''.

Mr Lanz then told Sutherland he would have to ''pay up'', which the defendant disagreed with, believing the Earth was round.

Some time later the pair encountered each other at a petrol station - Sutherland mentioned he ''wanted his money''.

"He was starting to make threats in order for me to pay up.

"I told him many times it was just a joke bet ... the way I said it was in a joking manner; he just didn't take it that way.''

On February 14 the pair again encountered each other at the petrol station, Sutherland approached Lanz and became ''more forceful'' in his demand for the money.

''[He said] if you don't pay it I'll get a crossbow, I'll shoot you and your father, put you in the trunk and they'll never see you again."

Mr Lanz said with the benefit of hindsight he did not believe Sutherland had any intention of following through with the threat, but at the time was shocked and unsure if he meant it, so told his father.

"When someone threatens to kill you with a crossbow it's quite concerning."

Mr Lanz said neither he, nor his father, wanted the matter to proceed through the court, believing Sutherland had learned his lesson.

"I hope he's doing better and we can all just move on.''

He referred to a post Mr Lanz made in July, saying the Earth was a ''spheroid water-filled round body'', indicating Mr Lanz had now changed his view.

However, Mr Lanz said that was a GIF designed to show ''how ridiculous the idea of a floating water ball is''.

Among his beliefs were that Nasa was a consipiracy to ''hoodwink'' people, Albert Einstein was used for the same purpose, and the New Zealand Government was involved in the Christchurch mosque shootings, Mr Tohill said.

"In the real world your statements have consequences ... as opposed to the fringe world that you live in on the internet.

"There are no consequences.

"You can say whatever you want.

"You had this bet with Mr Sutherland. You bet the Earth was flat. He believes he's won.

"He wants his money."

Mr Tohill said Sutherland had not threatened Mr Lanz, did not have a crossbow and would give evidence Mr Lanz asked for his bank account details in February.

Ultimately, however, after a short restorative justice meeting between the two this morning, Judge Farnan found there was no case to answer and dismissed the charge.

Sutherland had apologised to Mr Lanz for any comments he made and ''made it clear'' he accepted he would not be receiving any payment.