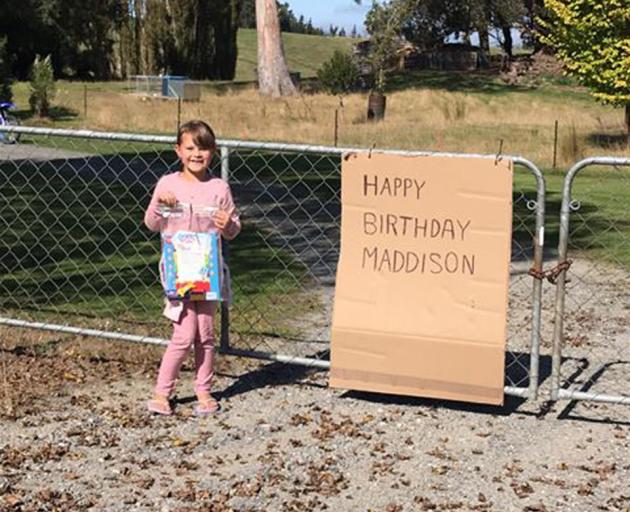 Madison Wall (7), of Balclutha, outside the property of a neighbour who made her a sign and set up a teddy bear display for her birthday on Wednesday. PHOTO: SUPPLIED
Baking a chocolate cake and going for a nice walk.

That was what Madison Wall, of Balclutha, asked to do on her 7th birthday on Wednesday.

But, as it turned out, she got a whole lot more than that, despite the Covid-19 lockdown.

The family's neighbours also got in on the festivities, in the form of gifts, a happy birthday sign and a teddy bear display.

Madison's mother, Jemma Wall, said she and her daughter were "blown away" by the generosity of virtual strangers, considering the Walls moved to the town only last week.

Madison was brought to tears by the sign, discovered on their birthday walk.

"Madison cried because she could not believe it ... she was quite overwhelmed.

"There was a wee present attached too."

There were also several teddy bears dotted around a paddock on the property, including one on a motorbike, for Madison to enjoy.

In return, she left a slice of birthday cake in the letterbox.

Another neighbour knitted Madison a teddy bear, and another left her a card and chocolates.

Mrs Wall said Madison "must have told one of the neighbours’’ it was her birthday, who then spread the word.

"I think she was more excited about that than what we had done.

She said it was a birthday that would not be soon forgotten.

"Everyone wanted to make it extra special."