By Richard Davison
0 Comments
Festive preparations are under way throughout South Otago for the arrival of a special seasonal visitor.

The Clutha Country Santa Parade returns to Balclutha today at 1pm, and organisers expect more than 30 groups and floats  to take part.

Among those rummaging through dusty decoration boxes this week have been the pupils and teachers of Clutha Valley School in Clydevale.

Speaking on Wednesday, teacher Reegan Tourell said excitement was beginning to mount  for the parade.

The school  also had been busy getting ready for the school’s annual fair, which was held yesterday.

"The whole school has been pretty busy getting both events off the ground this week, with some of our senior pupils acting as fair CEOs and leading the way ... We’re taking a look at some of the elements for our [Santa Parade] float ... and seeing how those are going to come together." 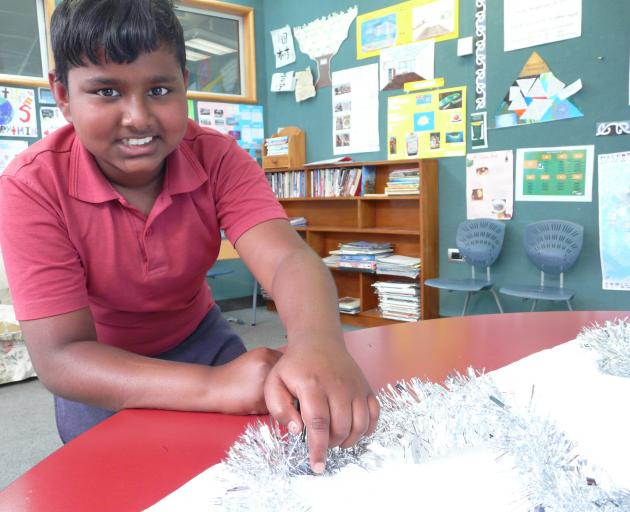 Clutha Valley School pupil Janindu Mallawaarachchi (11) staples tinsel to a sheet to be used for decorating the school’s Clutha Country float for today’s Santa Parade. Photo: Richard Davison
Clydevale business Clutha Valley Transport had donated the use of a truck for the parade,  which would be draped with tinsel-fringed sheets and turned into a Christmas scene, she said.

The school’s ukulele group would be on the float and regale the passing crowds with a "Christmas medley" of festive hits and carols.

As there were representatives of 14 different

cultures among the school’s pupils - some from as far afield as Brazil and Thailand - the school would  mark its diversity with flags from  the various nations.

This was the second consecutive year the school had taken part in the parade, she said.

"It was a great experience for us all last year, where we really emphasised that diversity and represented our school within the community.

"This year we’re probably leaning in towards Christmas a bit more. Taking part helps build happy memories and a sense of community for our children."

Parade spokeswoman Jean Proctor said organisers were "very pleased" with the number of floats registered, which was up slightly on last year.

"There looks to be an excellent variety and calibre of entries, so it should make for a very entertaining and enjoyable parade this year. With the Christmas Market running alongside, town should be buzzing."