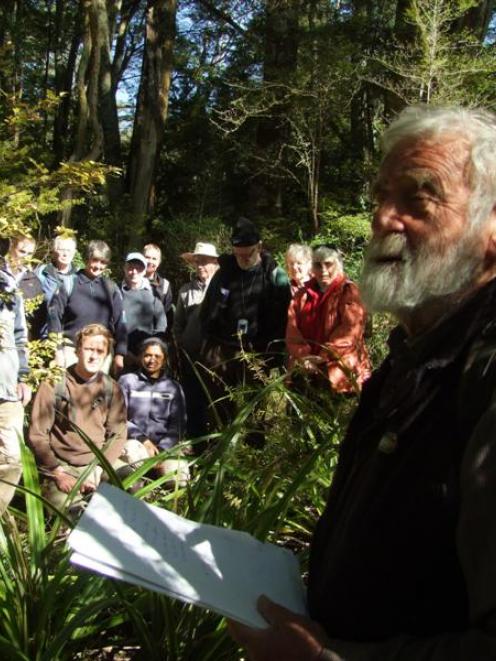 Leading Otago conservationist Prof Allan Mark talks to Forest and Bird and other interested members of the public during a visit to Birch Island on the Clutha River on Saturday. Photo by Glenn Gonway.
A group of Otago environmentalists have a suggestion for the power company considering four possible hydro-electric options for the Clutha River - a fifth option of walking away and doing nothing.

Otago Forest and Bird members and residents who say they would be directly affected by Contact Energy's options of dams at Tuapeka Mouth and/or Beaumont, visited a 6ha island on Saturday they assert is too precious to lose.

And they believe they are in a much better position to fight this time, compared with the battles of the 1980s and 1990s when locals feared Beaumont and Birch Island would disappear under water if a dam was built.

Environmentalists fought against losing Birch Island, claiming it was totally forested and rodent-free and also supported a rich assortment of insects.

The former Electricity Corporation of New Zealand (ECNZ) walked away from the South Otago dam projects in the mid 1990s, but Contact is now revisiting those and two possible projects at Queensberry and Luggate.

But former Otago Conservation Board chairman and leading conservationist Prof Allan Mark said, during a visit to Birch Island, opponents to the dam had more on their side than ever before.

The island was now officially a national area of interest and significance, it was known to contain a wealth of conservation values, clearly contained a unique ecosystem and locals were better informed and more prepared to challenge authorities this time.

"The fight for Birch Island is on again," Prof Mark said.

The group was taken across the river by Beaumont Jet staff to the island where it spent about three hours exploring.

Prof Mark said the group and others preparing to fight against the loss of the island were formally serving Contact Energy with notice there was another alternative.

"Instead of just having the four options for dams, we are saying there is an option five - no dams at all," he said.

Meanwhile, Contact spokesman Neil Gillespie said the power company was well aware of concerns surrounding Birch Island and it would do what it could to mitigate and remedy those.

But Birch Island's fate would only come into focus if the company pushed ahead with the Tuapeka Mouth dam option - one of four being considered along the river.

A decision on which option, if any was chosen, would be announced early next year.