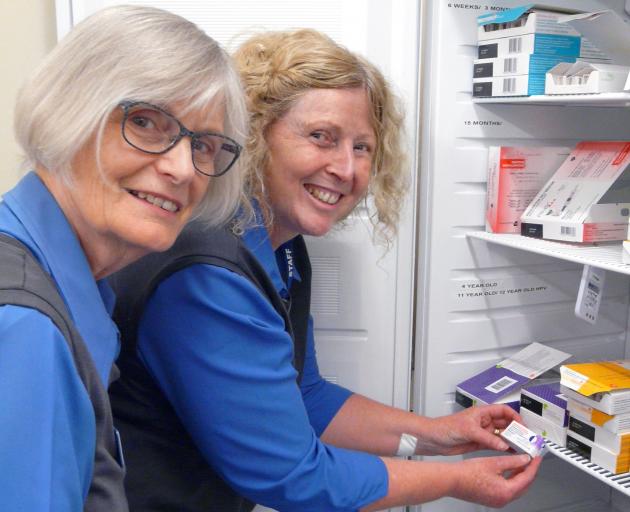 Clutha Health First nurses Jeannette Blair (left) and Andrea Sim say it has been a quiet year for flu cases in South Otago, thanks to high levels of vaccination last winter. PHOTO: RICHARD DAVISON
South Otago residents concerned about recent viral outbreaks are being urged to contact their health professional.

Clutha Health First team leader general practice nurse Andrea Sim said although South Otago had a high overall level of immunisation, it was understandable people would be concerned by media coverage of recent disease outbreaks - including meningitis in Northland, and measles in Fiordland.

She said South Otago residents were generally "proactive", both in seeking advice on such matters, and in taking up vaccination opportunities.

"Like any infection, meningococcal strains are typically present in our normal flora, but can sometimes turn nasty. We've certainly had an upsurge in inquiries and requests for the meningitis vaccine since this latest outbreak of serious cases and fatalities in the north."

Inquiries had come largely from students heading north for university in the new year, and a children's group heading to Northland for a summer event, she said.

"We'll probably have vaccinated between 10 and 20 people before Christmas."

Recent cases of measles in Fiordland should be of lesser concern, she said.

"Measles vaccination forms part of the usual childhood MMR programme, and we have about a 95% immunisation level in South Otago. We haven't received any inquiries recently, as far as I'm aware."

The recent flu season was another reflection of generally positive public health in the region, she said.

Nearly 1700 patients had attended twin walk-in flu vaccination clinics during May, about 250 more than last year.

"The clinics, and patients, were amazing. We're really proud of local people for taking ownership of this public health issue and helping ensure the wider health of the community."

The marathon, 12-hour flu clinics, now in their fourth year, had become "almost a social event" for patients, she said.

"You feel pretty elated at the end of the day. It's a chance for everyone to catch up."

Ms Sim attributed an ensuing "quiet year" for flu cases to the high level of uptake.

"Most of the cases we've seen have been among younger people, and altogether fewer overall."

Also exercising the travelling public's minds at this time of year was the subject of holiday vaccinations, practice nurse Jeannette Blair said.

"First of all, talk to us about vaccinations early, as some programmes take up to six months to complete. Then there are other factors to consider, such as regular medications, a letter from your doctor detailing immunisations and specific health issues, and an emergency first aid kit."

With common sense, people could expect a safe and happy summer break abroad, she said.

"We're always happy to answer people's questions. If you're unsure, get in touch."