No Creamoata, but Dan soldiers on 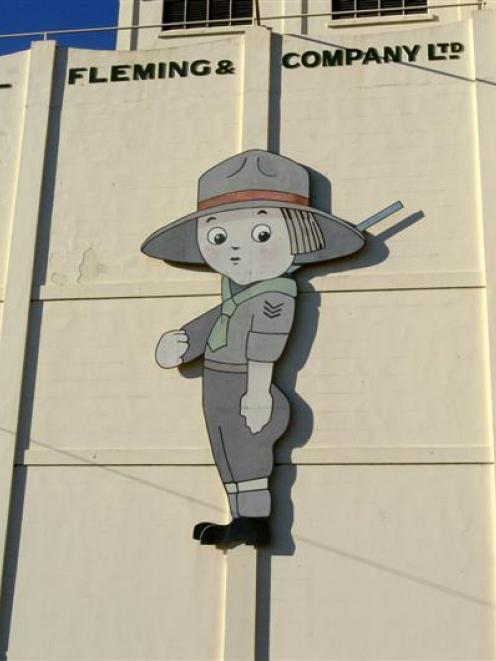 Sergeant Dan still keeps guard on the former Flemings mill, in Gore, where Creamoata was produced. Photo by Gerard O'Brien.
At ease, Sergeant Dan, the Creamoata Man - the national breakfast has been dismissed.

Food giant Nestle confirmed it has discontinued production of Creamoata oats, and supply is likely to cease from the New Year.

While oats had grown in popularity with the public in recent years, Creamoata, formally made in Gore, had a declining but "loyal" fan base, Nestle New Zealand corporate services manager Maurice Gunnell said.

After Goodman Fielder purchased the Flemings range of products in May 2006, production was shifted to Australia and the product was marketed under the Uncle Toby's brand.

Declining demand, coupled with drought in Australia, meant the timing was right to discontinue Creamoata, a smoother version of rolled oats, he said.

Foodstuffs, which owns the Pak'n Save and New World supermarkets, no longer stocks the brand and other grocery stores were likely to run out in the new year, Mr Gunnell said.

Nestle had received many calls from shoppers concerned about the possible unavailability of the product, and was responding by sending recipes on how to make home-made creamoata.

The recipe involves processing rolled oats into a fine or medium mix before cooking.

Gore Mayor Tracy Hicks said both he and his dog ate rolled oats every day, and it was sad to hear about the decline of Creamoata.

"Flemings Creamoata is a name synonymous with the Gore district, and good, healthy Scottish breakfasts. It will be sadly missed," he said.

He did not eat the Australian product, preferring locally sourced rolled oats from Dunedin company Harraways.

"We get people all the time coming in to ask us about the porridge, especially older people who grew up on the stuff."

The factory now specialised in stock feed for horses and calves, and continued to market the product with the Sergeant Dan name and logo, he said.

"Some people spend a fortune on brand names and logos. We have the perfect one, who is working well for us."

He had collected memorabilia from when Creamoata was produced at the mill and the earliest advertisements dated back to 1919, he said.

Up to five rail wagons a day of creamoata left the plant during its heyday in the 1950s, he said.