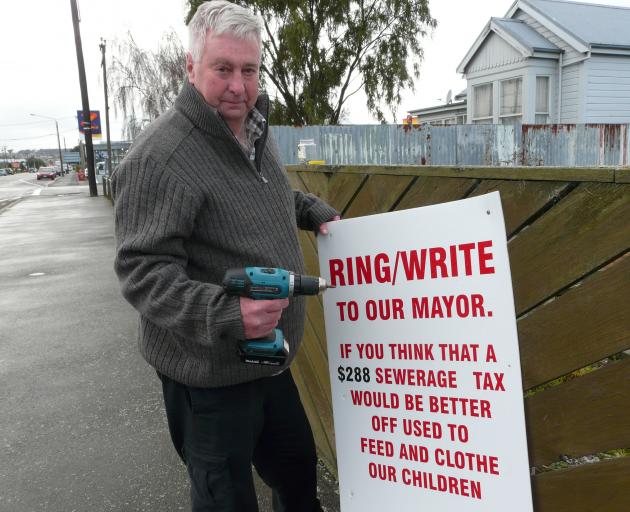 In August 2015, the Otago Daily Times reported on then 69-year-old Bruce Graham's concerns about the council's new Three Waters infrastructure programme in its 2015-25 long-term plan.

At the time, Mr Graham said he believed an ''unfair'' Balclutha ward rates rise of 7% arising from the project could force him out of his home of 20 years.

Since that time, continued lobbying supported by extensive research and ''marshalling of the facts'' had helped bring local rates into line with pension increases, he said when spoken to yesterday.

''It's mission accomplished. There are still other battle lines to be drawn with central Government over pensions, but it's time to take the protest signs down locally and withdraw.''

Mr Graham said he hoped his victory would act as an inspiration to others around the country who were struggling to pay their way, and a message to those in authority.

''The key was getting the facts down on paper. Once I'd got Work and Income to detail percentage pension increases over the past 20 years, I was able to go back to council and get their ear, to show them how out of kilter their rates increases were.

''You can't just sit there and take it.

Despite some ''bruising encounters'' with the Clutha District Council in the early days of his fight, council staff had come round, he said.

''They've actually ended up being pretty handy in analysing and understanding the financial issues pensioners are facing with rates. In particular, I think they've realised how unfair the Three Waters rate was.''

''We didn't enter into Three Waters lightly, as we have an obligation as a council to vote for what's best for the wider district. That decision has held and continues to be applied, but what council has done is to work carefully during the most recent long-term plan process towards a more manageable 1.61% average rates increase for the coming year.

''I think it's great that Bruce has fought for his issues. We always embrace feedback from ratepayers.''