Return to the place she called home 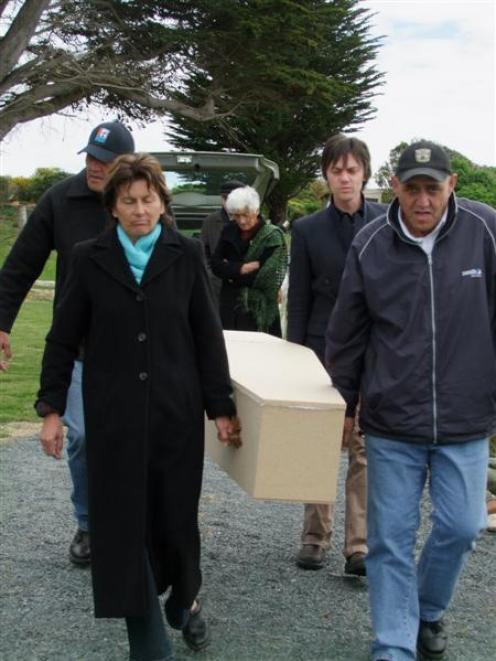 Pallbearers (from left, rear) John Scott and Aaron Scott and (front) Jenny O'Connell and Bruce Scott carry the simple pine casket containing the late Stella Raki Raki to her final resting place at the Maori cemetery at Kaka Point yesterday.
It was a simple burial service nearly half a century in the making yesterday.

The brief and moving ceremony at the Maori cemetery at Kaka Point was a homecoming for a woman who was born at the spot known as Maka Tu Urapa, died in her early 80s in 1964, and was buried in Dunedin.

That all changed yesterday when she was exhumed from the Anderson Bay Cemetery, placed in a simple pine casket and returned to her home overlooking the Kaka Point coastline, on a hill high above the township.

It was the first burial at the restored cemetery since one of her descendants was buried there in 1951.

Mrs Raki Raki would have been proud and happy, family members said at the service which lasted only a few minutes but meant the world to them.

It is largely through his efforts in the past three years that the 1ha site has been cleared of gorse, bush and thistle and the cemetery has been restored for future generations.

"It's good that Stella is back here, here where she belongs," he said quietly before the service.

Earlier in the day, a small group of relatives travelled to the Dunedin cemetery to lift the tapu from the burial site where Mrs Raki Raki had laid for 44 years.

They then followed a hearse from the city to Kaka Point.

For Mrs Raki Raki, it truly was a homecoming.

She was born on the site and lived her life on a plot of land just metres from her final resting place.

Maureen Wylie, who spoke after Mrs Raki Raki was laid to rest, said all of her grandsons had worked hard to restore the cemetery and it was fitting she return to the site she called home and bore the fruits of their labours.

It is also of special significance because Mrs Raki Raki's daughter, sisters, brothers and grandparents are among those already buried there.

Her grandson, Bruce Scott, told the service it was "only right" Mrs Raki Raki was back here.

"We've been talking about it for a long time but I'm glad she's now back here where she belongs."

Years of neglect had left the cemetery overgrown and hidden from view but a family reunion three years ago sparked Mr Scott's interest in restoring it.

Today, native shrubs have been planted, the lawns are manicured and the sea view restored.