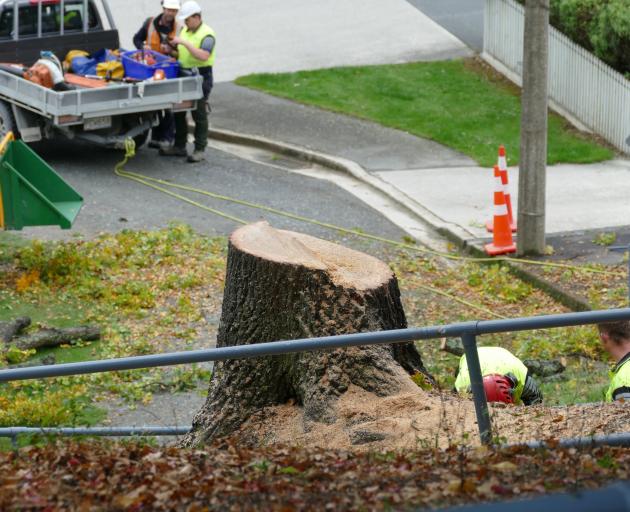 Contractors tidy up after felling an oak tree at the top of Lawrence’s Zig Zag track yesterday. PHOTO: RICHARD DAVISON
A controversial oak tree has dropped its last acorn.

The semi-mature oak, which sat at the top of Lawrence’s Zig Zag track linking Lancaster and Colonsay Sts, was felled by contractors yesterday morning in order to allow track improvement work to be done.

Controversy surrounding the tree’s felling arose in November, after the Lawrence-Tuapeka Community Board announced it would be removed due to health and safety concerns.

The board concluded the tree was a safety hazard because its acorns and leaves made the steep track slippery, as detailed in an arborist’s report.

Concerns were also raised about the continued impact of the tree’s root growth, which was lifting the track surface.

During consultation about the tree’s future, nearby resident Peter Flower questioned the necessity of felling a ‘‘perfectly healthy’’ tree.

After it’s removal yesterday, Mr Flower said he was ‘‘angry and disappointed’’ his concerns had fallen on deaf ears.

‘‘To be honest, I got the impression I was wasting my time, and their minds were made up from the outset.

‘‘It’s disappointing and irresponsible that officials are still whacking down trees as severe climate change is imminent.’’

He poured scorn on the reasoning behind the ‘‘beautiful’’ tree’s removal.

‘‘Look at the [Clutha Gold] Rail Trail. There are millions of acorns across that, and nobody’s been killed yet. It was just a pretext to get rid of it.’’

Board chairman Geoff Davidson he was pleased work could now begin on upgrading the track.

‘‘We went through a thorough process, and gave the wider public a fair chance to have its say.

‘‘The conversation has been a bit disappointing at times, with some unnecessary criticism on social media, but now we just want to move on and get going with the enhancements, which will make a real difference to this link into town.’’

The Clutha District Council has earmarked $50,000 for track refurbishment, which is expected to begin shortly.