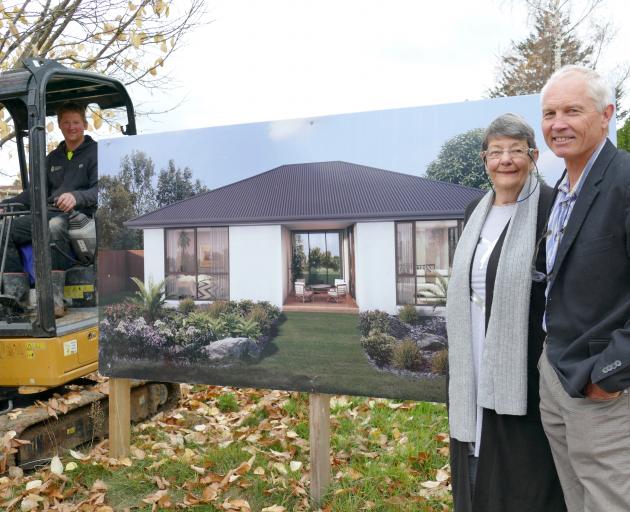 Tuapeka Community Health Incorporated chairman Mark Hay said a grant of $237,000 from The Trusts Community Foundation, and a further $54,000 from the Community Trust of Otago meant the project to build an initial five modern villas for elderly residents off Harrington Pl could now move ahead "with confidence".

In addition, the corporation had agreed a sale with its first buyer, Lawrence retiree Rosemary Stephenson (80).

Sites for the first two "modern-style villas" had been excavated and were now ready for action.

Mr Chapman said he expected to finish the buildings, which adjoin the town’s medical centre, by the end of the year.

Mr Hay described the receipt of the grants as a "huge relief".

"This is a non-profit project for the benefit of the community, with the intention of allowing older residents requiring safe and independent living, close to medical facilities, to remain in Lawrence, close to family and friends.

"As such, all such community donations and grants allow us to keep the cost of the homes as affordable as possible.

"These latest grants will allow us to be less reliant on Tuapeka Health’s reserves in what is a challenging environment for health providers at present."

He said the grants would also be used to provide elements such as improved landscaping for the complex, and security fencing and gate access.

Mrs Stephenson, who moved to Lawrence from Auckland with her daughter 10 years ago, said she was very excited to see work beginning on her new two-bedroom, 81sqm home.

"I like the fact that I won’t have to move very far, and that it’s a modern, purpose-built design that takes account of mobility difficulties, easy heating and safety as I grow older.

"There’s even a spare room for my grandchildren to visit."

She praised the corporation for its initiative in building the complex.

"At my age, how many people get the chance to move into a brand new, purpose-built house at cost?"

The house would cost Mrs Stephenson $295,000, and be used as a show home to promote the project.

Other subsidies were available to local residents, and could be discussed with interested parties, Mr Hay said.