What is 60 years old, painted red and cream and will be used to carry passengers embarking on the biggest journey of their lives?

The answer is a little old school bus hidden away at Port Molyneux near Kaka Point.

The bus, which formerly was used as a courtesy coach for patrons at the Captain Cook Tavern in Dunedin, has been taken over and renovated by Jade and Lyndon McNab for their joint-business wedding venue, the Port Molyneux School.

The pair bought the bus at the start of the year in "pretty rough" condition, Mrs McNab said.

The bus has been transformed from its notable bright yellow colour to the exact  red and cream colours used on  the original school buses.

It has been at a panel beater for the past few  months having some of the rusted metalwork replaced and getting painted.

"It smelled a bit like a dirty night club when we first got inside of it."

The bus had also been christened "Rona" after a Kaka Point resident who had lived there "forever", Mrs McNab said.

After the bus was decommissioned from its role at the Captain Cook Tavern, it was purchased by a group of men who had used it for ‘‘booze cruises’’.

Mr McNab said it seemed "meant to be" that he and his wife were to acquire the 60-year-old vehicle as the men who owned it previously were not even advertising  it forsale. By luck, the McNabs asked if they could purchase it and it became theirs.

While Mr McNab was happy to see the difference in the bus since they had begun its transformation, when asked, he was not sure whether he would do it again, given that, like most renovations, it went well over budget and schedule. 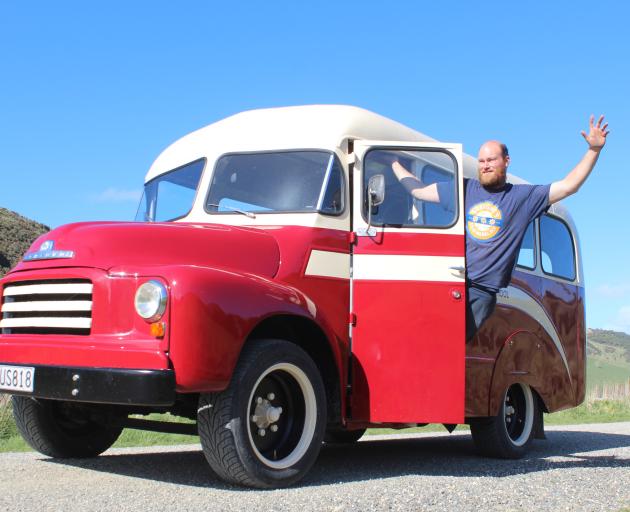 Lyndon McNab with the renovated school bus ‘‘Rona’’ which will be used to transport wedding parties at the beachfront wedding venue he and his wife, Jade,own. Photo: Samuel White
Mechanically, the bus was mostly sound and only needed minor repairs but the exterior had "a lot" of rust that had to be  replaced.

Finding the original paint colours of the old school buses proved difficult.Mr McNab was now hard at work getting the interior renovated in time for his brother’s wedding at Labour Weekend.

Once the bus was ready, it would be available for hire to transport those using the wedding venue at Port Molyneux.

Mr McNab hoped there would be a market for the vintage bus and that the investment was worth it.