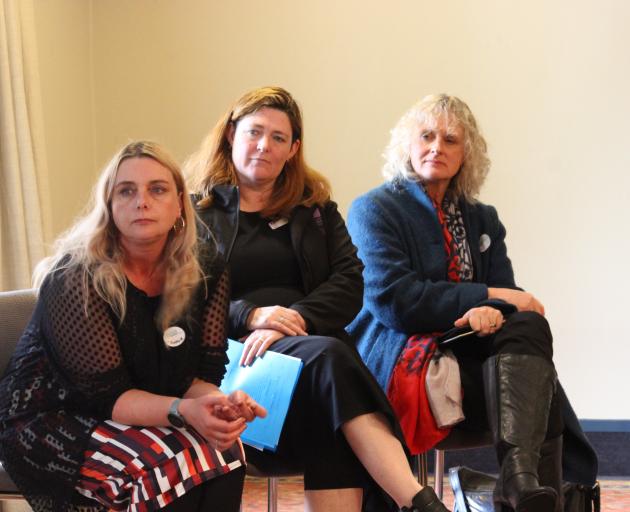 Listening intently to a caregiver talking about the impact of staff shortages at her aged residential care workplace at a public meeting in Invercargill yesterday are (from left) Etu organiser Anna Huffstutler, New Zealand Nurses Organisation industrial organiser Colette Wright and Labour list MP Liz Craig. PHOTO: KAREN PASCO
An aged-care worker told of the shame she felt when family members of people she was caring for complained about the state they found their loved ones in when they came to visit.

She spoke at a meeting in Invercargill yesterday organised by the New Zealand Nurses Organisation (NZNO) and union Etu, at which a petition was launched to garner support for mandatory minimum staffing regulations for residential aged-care facilities.

Three women, who wanted to remain anonymous for fear of repercussions from employers, spoke up about what they experienced and the impact it had on them.

‘‘Imagine the shame when family members of the residents you look after complain about their loved ones losing weight, nails not being cut, faces not being cleaned, sitting in a lounge room smelling like they soiled themselves, wrinkled clothing, untidy hair, not being walked enough, showers not being given, hair not being washed, beds not being made, rooms not tidy, sitting at the table eating lunch for over an hour — the list goes on,’’ one woman said.

She would work unpaid overtime and go to work on her days off to complete paperwork.

Aged-care workers put their lives on hold to give other people’s loved ones care and support, she said.

‘‘If this was my mum, your dad . . . or any one of your whanau, you would want their care to be the best possible care that can be provided.

‘‘But as things are, they simply aren’t getting that care.’’

Another said she just wanted to have more time, not just to complete the everyday tasks, but also offer emotional support to residents, ‘‘not having to cut their conversations short because you had something to do five minutes ago’’.

Some were worried about staffing levels at night, especially if an emergency occurred.

One said on some occasions staffing levels were such, each worker would be able to spend only six minutes with each resident on a shift.

NZNO organiser Colette Wright said staffing guidelines were optional, very much out of date and did not provide for the increasingly complex health needs of older New Zealanders.

The petition asks Prime Minister Jacinda Ardern and the New Zealand House of Representatives to support mandatory minimum safe staffing regulations for aged residential care facilities and would be presented next month, she said.