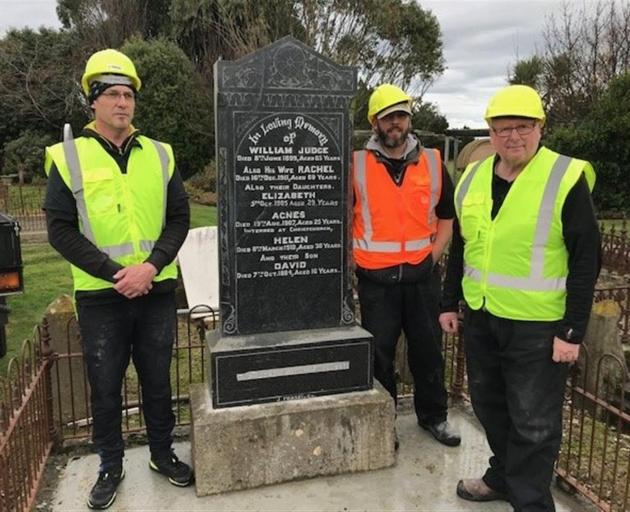 The headstone after repairs and installation were complete by Maiden Stone workers (from left) Aaron Muilwyk and Ben Naseby and owner Ian Trainor.
Hamilton woman Sharon Lankshear is proud her great-great-grandparents’ headstone at Wallacetown has been restored to its former glory. 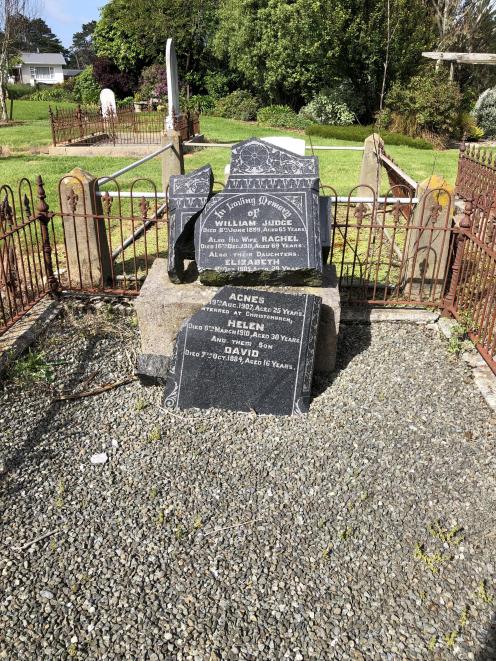 The headstone of William and Rachel Judge in the Wallacetown cemetery before the repair work was carried out. PHOTOS: SUPPLIED
The headstone, which Mrs Lankshear and her sister, Fiona, found broken during a visit to Southland in the summer holidays earlier this year, was repaired and reinstalled last week.

Mrs Lankshear had set up a Givealittle page to raise funds with donations given by family members from throughout the world.

For Mrs Lankshear the restoration meant a lot.

"My mother passed away when I was 13 and it was her side of the family.

"When we found it we thought, ‘Let’s do something about this’."

So the money was raised and Ian Trainor from Maiden Stone completed the work for the family.

"The restoration took about 20 hours," he said.

"There was quite a bit involved, lifting up the old concrete plinth, removing all the bits and bobs and joining them back together."

He also had to fabricate a new piece to replace one that was missing, he said.

Mrs Lankshear said she had now been in touch with quite a few relatives who were extremely pleased to see the completed work.