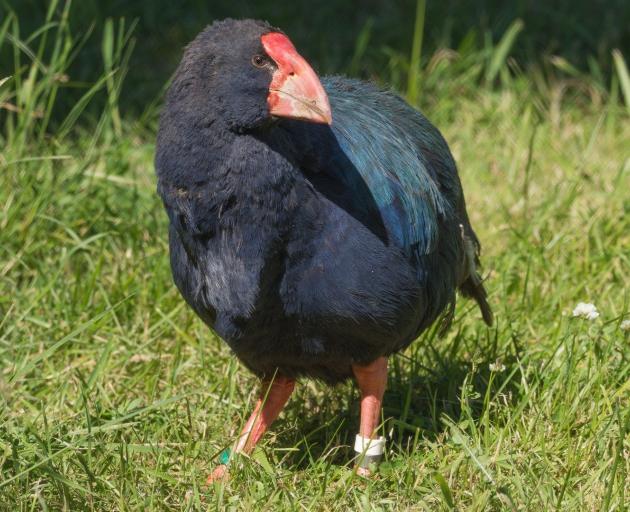 Foster-father of 13, the 16-year-old bird injured his leg last year and was put down late last month.

Department of Conservation takahe senior ranger Glen Greaves said it was a sad time for the team.

"He was getting on in years. He has done a fantastic job for the recovery of the species.

"It’s never nice to see a bird in pain like that."

Mr Greaves said Tumbles would strut around the pen and liked to show off.

"As far as I understand, he was very gregarious, very friendly."

A bit of a southern celebrity, Tumbles was a big bird, and being good-looking made him great for advocacy purposes, he said.

Tumbles was taken to Waitangi Day celebrations in Southland each year.

A post to social media last week informed the public of his death.

Comments passed on condolences to the Fiordland team, and others reminisced about Tumbles’ "show-pony" character.

While he was infertile, Tumbles fostered chicks with his Te Anau Bird Sanctuary partner, Kawa.

Doc staff gave the couple fertile eggs from genetically-valuable birds, and they would raise them as their own while the donor pair re-nested.

"Effectively, you’re getting double the number of eggs."

At the time of Tumbles’ death, this season’s chick was 10 weeks old.

"We’ve been growing at about 10% per year for the last four years. Most of our sites are nearing capacity."

However, he called this an insurance population and the issue remained in growing the wild populations.

Predatory pests, such as stoats, were the main culprit.

It was not known how Tumbles hurt his leg but it was not uncommon for ageing takahe to hurt themselves this way, Mr Greaves said.

"It might have been as simple as stepping down off a plant."

It was irreparable for a bird of his age, and the team did not want to put him through that, he said.

Life expectancy for takahe in sanctuaries could be 27 years, while in the wild, 15 was about the maximum.

Feathers from the native species, as with others, were given to iwi.