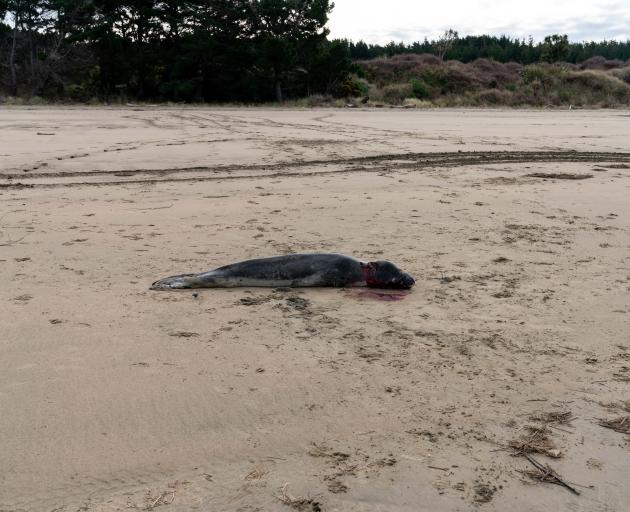 The Department of Conservation [Doc] is appealing for the public’s help after the dead seal was found near Sandy Point, in Southland, on July 23.

Initial investigations revealed the animal appeared to have been shot, most likely with a small-calibre rifle.

Evidence on site also suggests a vehicle had been circling around the animal, which may have caused it further distress.

"After collecting information and communicating with the local Waihopai runaka, it has been decided to allow the animal to decompose naturally," Doc senior biodiversity ranger Rosalind Cole said.

"Leopard seals are considered a taonga species to Ngai Tahu. Local iwi have expressed how sad and tragic it is that a member of the public would carry out such an act on a defenceless marine mammal. We completely agree."

University of Otago researcher Giverny Forbes said it was not uncommon to see leopard seals on the Southland coastlines around this time of year, and the mouth of the Oreti River was not an unusual location for one to visit.

The last confirmed case of someone killing a seal was in 2019, and violence against the animals was often due to misplaced fear, she said.

"There’s quite a big culture of misunderstanding of leopard seals. In media and stuff they’re often described as really dangerous and really aggressive. And of course, they are large predators so they are capable of hurting people, but in general, if you leave them alone, they’re not going to do anything to you.

"I’ve spent over 100 hours watching leopard seals on Otago’s coast, and none of those seals did anything to threaten anyone."

Leopard seals are protected under the Marine Mammals Protection Act and offences against them carry significant penalties.

A spokesperson for LeopardSeals.org said this particular leopard seal was not known to be in their database at this time.

Doc is appealing for anyone with information about this incident to call the Doc hotline on 0800 DOC HOT (0800 362 468) and ask for the Invercargill team.

Initial investigations showed the juvenile leopard seal looked in otherwise good health, so it is unknown why it may have come ashore.