Farewell for Southern son and soldier 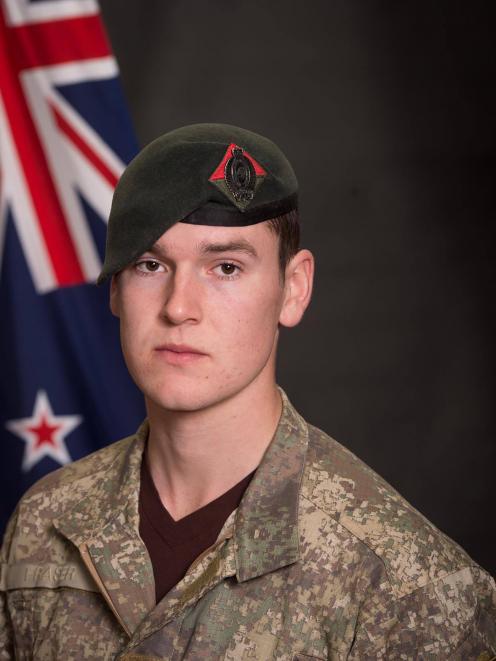 Morgan Fraser, the hiker found dead on Mt Taranaki, was farewelled in Gore this week .

The 22-year-old soldier, who was brought up in Riversdale, was found dead on the mountain on June 29.

He was reported missing on June 28 after failing to return from a climb and his body was found after midnight.

The service was held at the Gore RSA on Thursday.

Mr Fraser’s mother, Sherryl Mackay, said the family was devastated by the hole her son’s death left in the family.

‘‘Morgan was a highly trained and experienced climber who had a passion for mountaineering, and we take comfort in knowing he was doing what he loved,’’ Mrs Mackay said.

‘‘As a young boy, Morgan was sensitive and sweet,’’ she said.

‘‘He never lost that compassion and empathy, even as he proved himself in army training and developed into a man.’’

Mr Fraser’s father, Glen Fraser, said his son had wanted to join the army from an early age.

‘‘The army was the making of him and he thrived in that environment,’’ he said.

‘‘He was in a really good spot in his life — he had an amazing group of friends around him, was happy in his work and had clear plans for his future.

‘‘The whole family is devastated at losing Morgan.’’

Morgan Fraser’s sister, Meredith Fraser, speaking on behalf of her brothers and sisters, said their brother had been an incredibly caring member of the family.

‘‘He was extremely generous in sharing his time with his many brothers and sisters, and he found different ways to hang out with each of us, whether that involved downing a pint or two with his older siblings or spinning around and playing with his younger ones,’’ Miss Fraser said.

‘‘Even after he developed into a strapping army man, he would always have a big bear hug available whenever he caught up with us,’’ she said.

‘‘Morgan was a bit of a larrikin at times — he typically had a mischievous glint in his eye and delighted in pranking us.

‘‘He had a zest for life and was always on the go, whether kicking around a footy ball, going hunting, tearing around on motorbikes or hammering us in water-bomb or snowball fights,’’ Miss Fraser said.

Morgan Fraser attended Riversdale Primary School and principal Kay Stevens said she had fond memories of him as a sensitive and caring pupil with a twinkle in his eye.

He was part of a group of pupils who were friends throughout their school years, she said.

‘‘I had such fond memories of that group of children,’’ Mrs Stevens said.

‘‘He was a very capable academic student.’’

Mr Fraser had attended this year’s Anzac service in Riversdale, she said.

‘‘My last memory is sitting around my kitchen table with this group of boys,’’ she said.

‘‘He always came up and said ‘how are you going, Mrs Stevens?’ It’s very tragic, really.’’

‘‘He was the epitome of how we want our graduates to be as they leave St Peter’s College,’’ she said.

He was a very genuine young man, who was well liked by both staff and pupils, she said.

‘‘He was part of a very high­achieving group of young people that graduated in 2012 and continue to have strong friendships to this day,’’ she said.

Mr Fraser was as at home on the sports field as he was on the stage. As well as being a member of the first XI hockey team and first XV rugby team, he was an important part of the senior drama team that competed in the Otago-Southland Bishop’s Shield Competition.

He once played the part of a very convincing David Attenborough and gave some memorable performances at the school’s annual Eisteddfod, Mrs Nicholson said.

‘‘To acknowledge his leadership at school and the respect his peers held for him, he was named McAuley House leader in 2012,’’ she said.

Mr Fraser achieved well in the humanities as well as physical education.

His former history teacher, Steven Packer, said pupils like Mr Fraser ‘‘make you feel privileged, honoured and incredibly lucky to be a teacher’’.

‘‘ All of us who knew Morgan would agree with this — he will be very fondly remembered and very sadly missed,’’ Mrs Nicholson said.