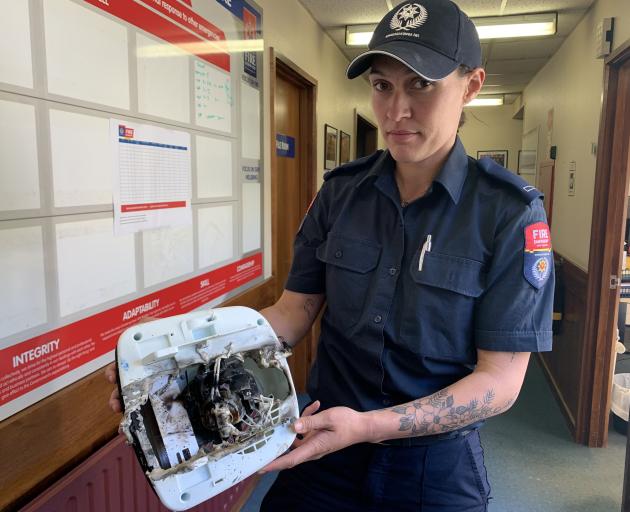 Invercargill Firefighter Tianna Newlove holds a fan heater which caught fire at a property she was sent to in Grasmere this week. PHOTO: ABBEY PALMER
An Invercargill mother was getting her children ready for school when she heard an unusual ticking sound.

Her fan heater had gone up in flames — a product which was later discovered to be featured on a government department’s product recall list.

Two Fire and Emergency New Zealand crews were sent to a Grasmere property about 7.55am on Tuesday following a call from the home owner.

Invercargill fire investigator Murray Milne-Maresca said the woman had noticed something was "ticking" and went to find out where the noise was coming from.

It was then she saw the Goldair fan heater on fire.

"The fire caught on to the wall and there was some other minor structural damage," Mr Milne-Maresca said.

"It was really lucky the fire didn’t spread to anywhere else and fire crews were able to respond quickly."

While the owner had done a "great job" of ensuring smoke alarms had been installed, firefighters assisted the family by installing a few more throughout the property.

Once the fire had been put out, he began his investigation.

Following a scan of the Ministry of Business, Innovation and Employment product recall list online, he was not surprised to discover the company had been forced to remove the model from the market.

A fire risk had been identified with the product and the control box was found to be faulty.

Mr Milne-Maresca said it was very likely the same product fault caused the fire to start on the fan heater at the Grasmere property.

"We recommend having a look at the product recall list before buying an appliance to check it is safe."

The incident had been reported to Energy Safety, a regulator for WorkSafe New Zealand.