By Mike Houlahan and Luisa Girao
0 Comments
Southlanders say they will fight to the last breath to save more than 1000 jobs in danger of being lost after the owner of Tiwai Point aluminium smelter yesterday announced the plant would close.The province awoke to the news yesterday, the breakfast time announcement being made first to the US stock exchange.

While not totally unexpected, given the smelter’s owner Rio Tinto instigated a strategic review of the future of the business last year, the imminent loss of an enterprise worth 6.5% of Southland’s GDP was a bitter blow.

"We have to do what we can to retain them [the jobs]."

The smelter directly employs about 1000 people, and a further 1200 people’s livelihoods are partly or totally dependent on supplying the enterprise. Many of those are highly-paid, specialist engineering roles.

Southland Chamber of Commerce president Neil McAra said the ripple effect of the closure on Southland could be not underestimated.

"This will be a hammer blow for the entire Southland community, impacting unemployment, business, housing prices, and the wider social and cultural fabric of Southland."

In its statement to the stock exchange, Rio Tinto said the firm made an underlying loss of $46million in 2019.

The high cost of electricity for the energy-intensive smelting process and the projected low cost of aluminium in the future meant that the firm would take the next 14 months to wind down and then close Tiwai Point.

Smelter chief executive and general manager Stew Hamilton said the primary concern had been the announcement and "the people".

"I like to think we are resilient, but it’s going to take us a long time to come back from this," he said.

While some regional leaders were determined to fight to keep Tiwai Point open, others appeared to accept the closure was inevitable and were looking to the future.

Southland District Mayor Gary Tong said while he still hoped Rio Tinto would change its mind, the region needed to take the period while the plant closed to assist its people find new employment.

"We have all got to dig deep and work together — the impact on the community is the number one," he said.

"We have the Bluff master plan, we have aquaculture, we have primary industries, is there another way of doing things if these other negotiations all fail?"

Meat company Alliance Group, regarded as Southland’s largest employer, said it would "certainly be interested" in talking with anyone who wanted to work for it. 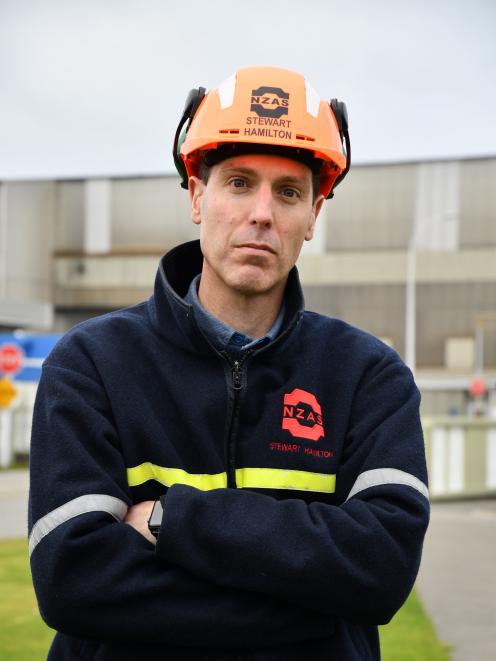 In April, the company announced it was spending $4million to increase its beef processing at its Lorneville plant, near Invercargill, and that it would also create new employment opportunities for Southlanders.

Finance Minister Grant Robertson said while yesterday was a sad day for Invercargill the closure also offered opportunity, especially in the manufacturing and aquaculture sectors.

"The message I have for the people of Southland today is that the Government stands alongside you and with you to start providing new job opportunities in the region," he said.

Mr Robertson said the Government had followed the precedent set by previous National Governments not to provide subsidies for Rio Tinto, but had attempted to negotiate terms which might have kept the smelter operating.

"Regrettably, they have made this decision today," he said.

Energy Minister Megan Woods said the Government was looking at urgent upgrades to the national grid to divert electricity used at the plant elsewhere, and that there had already been approaches from businesses about using some of that energy.

"I also want to make clear that the Government expects Rio Tinto to meet their obligations for clean-up of the site (an estimated $256million) and do the right thing on the dross."

Almost 10,000 tonnes of potentially poisonous aluminium dross created by the smelter sits in a disused Mataura paper mill, a building which was came perilously close to flooding last year.

"It is unconscionable that despite massive support from New Zealand ... Rio Tinto is bailing on Southlanders at the height of an economic crisis," he said. — Additional reporting Laura Smith