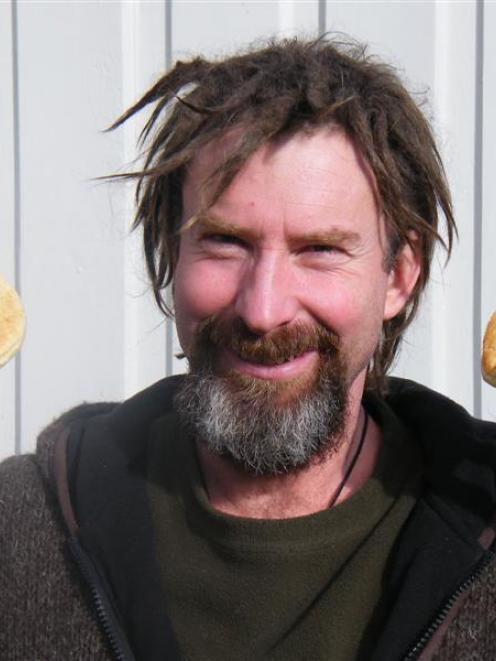 Delivery driver Neil Meyer with two of the Highland meat pies produced at Gore’s Oven Fresh Bakery.
Some of the South's best natural ingredients, along with steak from Highland cattle, have been combined to make some hearty pies produced at a Gore bakery.

A story in last week's Ensign about Dr Elaine Munro and Nick Speirs' Highland cattle stud prompted Mataura man Neil Meyer to contact the paper to tell us just how good the meat from the animals was.

Mr Meyer, who picked up the Highland pies from Oven Fresh Bakery in Gore and delivered them back to the meat's point of origin - Jacqui and Stu Dreaver's Owaka property - said the meaty pies were becoming a hit with pie eaters.
The Dreavers worked with Oven Fresh Bakery owner Bryan Hodges to develop a recipe using their own Highland and Highland-cross meat.

Mr Dreaver described Mr Hodges as a ‘‘brilliant man'' who had come up with a flavoursome recipe.

The couple had carried out extensive market research before deciding to approach Mr Hodges. Mr Dreaver said Oven Fresh Bakery's pastry was excellent and the bakery staff were good to work with.

The meat, which had low levels of fat and cholesterol, was processed at Edendale Butchery, Mr Dreaver said.

The pies were made in batches of 70-80 per week and were selling like hotcakes at two Owaka outlets, he said.

The pies contained 51 per cent meat - nearly double the minimum requirement - which was ‘‘unheard of in the pie industry'', he said.

Highland meat was renowned for its marbled consistency.
The couple planned to sell the pies at the Gore and Mataura markets in the future, he said.

The couple also sell steak to local restaurants. Mr Hodges said the Dreavers supplied most of the ingredients, which included bush honey, garlic sauces and meat.

At this stage, Oven Fresh Bakery did not sell the pies in its Main St outlet.

Mr Hodges described the venture as another ‘‘wee'' sideline. The business produces about 400 pies a day.