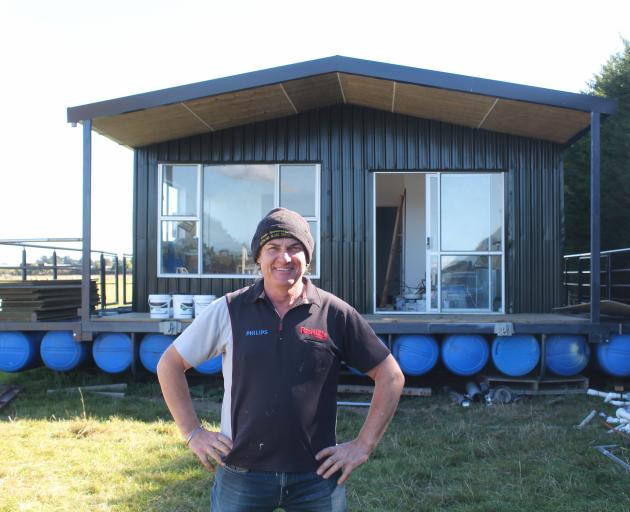 Ian Horsham in front of his houseboat. PHOTO: VALU MAKA
A Southland man’s dream to captain a houseboat on Lake Dunstan rests on Southland District Council (SDC) decisions to keep it afloat — provided he makes applications.

Ian Horsham said he was still working with an engineer before submitting any to the SDC.

He was due to launch his $50,000 and counting, 86sqm houseboat on Saturday, March 26, at its mooring site on Lake Dunstan between Pisa Moorings and Lowburn.

A few days before launch, Mr Horsham was forced to put the sacrificial Champagne back on ice due to a Central Otago District Council injunction.

Mr Horsham said despite the fact he might have "stuffed up" on the applications he had made so far, he had a lot of support and his work with the engineer would take a couple weeks to ensure everything was done properly before making applications to the SDC.

That included a building consent and a certificate of compliance.

An SDC spokesman confirmed last week the council had received nothing from Mr Horsham.

Mr Horsham said the sticking point, particularly in Central Otago, centred on whether his houseboat was designated as a "vessel" or a "structure".

Central Otago District Council (CODC) regulatory services manager Lee Webster confirmed Mr Horsham had to chart a course back to the SDC as the consent issued by the CODC was for a mooring for a vessel.

The consent was granted under delegated authority and the key information in the application referred to mooring blocks and associated chain, he said.

"As a vessel does not require a resource consent — or building consent — and this was not included in the application and the consent was issued on that basis."

Following a complaint in January it was designated as a structure and a building consent would be required from the consenting authority where it was being constructed — in Southland.

That was communicated to Mr Horsham, Mr Webster said.

As a consequence of that a resource consent was also required and a mooring permit from Land Information New Zealand (Linz) which he understood had not been obtained.

Mr Webster said the consent for the mooring had not been revoked but the houseboat was outside of the scope of that consent and an application for resource consent for the structure with an assessment of environmental effects was required, in addition to the building consents and Linz permit.

Should Mr Horsham navigate those steps, he could still face choppy waters churned up by the wider Cromwell community.

Lake Dunstan Charitable Trust community engagement co-ordinator Megan Phillips said the trust had been notified by a member of the public and the community was concerned about the precedent set if the houseboat was approved with no clear guidelines from the CODC on this structure as well a limit, size, style set for future houseboats.