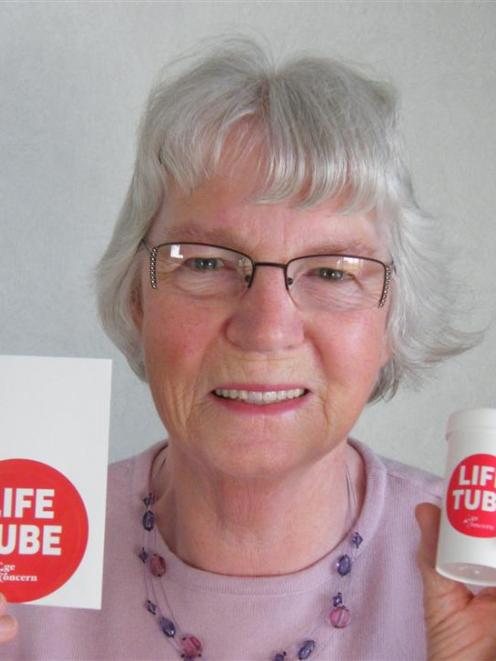 Gore woman Melva Beer is promoting Life Tubes, which contain medical information and are kept in the fridge.
When Gore woman Melva Beer was faced with having to deal with a friend who suddenly became ill when she was visiting her, she was unsure what to do and did not even know who her friend's doctor was.

Fortunately, Mrs Beer was able to contact the ambulance service and the story ended well.

That chance encounter prompted Mrs Beer to investigate methods of alerting people to vital medical details when those struck down suddenly with illness were unable to communicate.

She discovered that Age Concern had the perfect answer in a Life Tube, which consisted of a small tube with a form in it.

The tube was kept in the fridge and a bright sticker alerted people that a Life Tube was kept within.

The form contained information including the name of the person's doctor, their health conditions, medication, contact people, pharmacist and lawyer, Mrs Beer said.

"So it's got a really good range of things you need to know."

Mrs Beer had become the local contact for people wanting the Life Tubes, which were free. She had received about 30 orders, she said.

However, Mrs Beer said there needed to be publicity about the Life Tubes so people would know about their existence and how they operated.

"It's a brilliant idea but it's useless unless the public know about it," she said.

The Life Tubes were an excellent emergency measure for the elderly and those with chronic health conditions, she said.