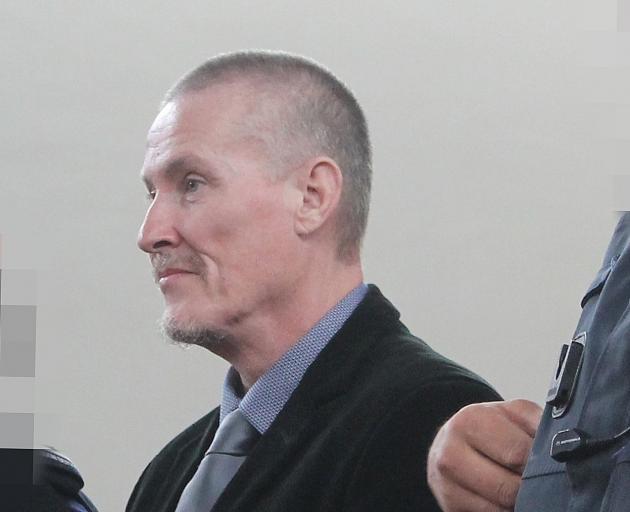 Rodney Stuart Fallowfield. Photo: Luisa Girao
A man on trial for killing his wife during their belated honeymoon in Te Anau said he snapped and he just wanted her to be quiet.

Rodney Stuart Fallowfield admitted the killing, but said he did not intend to murder Shirley Reedy.

The jury trial for Fallowfield (53) began before Justice Jan-Marie Doogue in the High Court at Invercargill today.

In her opening address, Crown solicitor Sarah McKenzie said there was no dispute on how and who killed Ms Reedy — both parties agreed the woman was strangled in the hotel room by her husband.

The question of the trial was about his intention and the Crown’s case was that he murdered Ms Reedy, she said.

Fallowfield and Ms Reedy lived in Balclutha and they knew each other about a year before their wedding in April 2019.

Since then, police attended six family harm incidents where Fallowfield and Ms Reedy were both “victims, aggressors, or offenders”.

“Their relationship was not without issues, “ Ms McKenzie said.

The first incident was the day after they were married, when Ms Reedy told the police Fallowfied had a gun in his possession but he did not have a license for it.

At the time, he was charged and sentenced to three months of home detention and the judge placed him on six months of post-conditions release.

Police also attended another five incidents — which included an occasion where Ms Reedy allegedly trespassed Fallowfield from the property on July 2019 and a complaint that Ms Reedy had been raped by Fallowfield when she went to pick up some belongings at his house in December 2019.

Police had not laid any charges in relation to those matters, however, on December 18, 2019 the Department of Corrections issued a non-association order to Fallowfield in relation to his wife.

During the lockdown, on March 25, the man obtained a relaxation on the order  —  he could contact Ms Reedy by phone, attend corrections appointments with her and have walks with her.

Despite the order, Ms McKenzie said it seemed Ms Reedy and Fallowfield were living together.

‘‘The defendant described their relationship during that time as the best they ever have been so much so on May 7, 2020, the defendant booked a motel room in Te Anau.’’

On May 15, 2020, the day which Ms Reedy was killed, the couple checked in at their accommodation and they headed to the township where they walked while holding hands and bought some wine.

After returning to the motel, at 3.22pm, Ms Reedy posted two pictures on her Facebook page, one with her husband and the other she was alone holding a glass of sparkling wine.

She wrote as the caption ‘‘Cheers from Te Anau’’, the court has heard.

Fallowfield has told the police at some stage Ms Reedy changed and they had a ‘‘bit of a tiff’’ in respect to a previous rape allegation made by Ms Reedy against Fallowfield.

‘‘He said they didn’t yell or anything but Shirley Reedy threatened to have him up for rape again. He says he pleaded with her not to and that she started to yell 'rape', 'rape'’’.

Fallowfield told the police he felt dirty and he just snapped.

“The defendant describes going over to Shirley Reedy and straddled her with a leg on either side of her torso, putting his hands around her throat.”

The jury heard when he removed his hands, she laid limp.

‘‘In his interview, he says he cuddled her, told her he loved her and he was sorry.’’

Ms McKenzie said the pressure applied on her neck was not minimal and told the court Ms Reedy was being treated with medication for schizophrenia at the time of the crime.

This is not a case where the defendant did not appreciate what he was doing and the very real consequences of his act, she said.

Defence counsel Katy Barker told jurors her client did not dispute that he killed his wife, nor the mechanism of her death.

In the beginning of the trial, Fallowfield denied the charge of the murder, but told the registrar that he pleaded guilty to manslaughter.

Ms Barker said Fallowfield neither intended to kill her nor cause any injury likely to cause her death.

Much of the evidence presented in court was accepted by both parties but the challenge for the jury was the interpretation of them, she said.

Ms Barker said the Crown would not be able to prove, without reasonable doubt, what the defendant’s state of mind was at the time of the offending.

“The defence’s case is that Mr Fallowfield just wanted his wife to be quiet . . . He did not intend to kill her,” she said.

The Crown would call 19 witnesses during the two-week trial.